Actors Theatre of Indiana will launch its next performance – Forbidden Broadway: It’s Back, It’s New, and Better Than Ever – with a grand opening night on Friday, April 26 at 7:30 p.m. at the Studio Theatre. 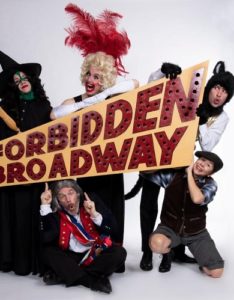 In this long-running, Off-Broadway hit musical, Broadway’s greatest musical legends meet Broadway’s greatest satirist in a hilarious, loving, and endlessly entertaining tribute to some of the theatre’s greatest stars and songwriters. This canon of witty and often-times brilliant parodies is a time capsule of the American Theatre.

Journey through more than 20 Broadway shows and spend the evening with the casts of The Little Mermaid, Newsies, The Book of Mormon, The Lion King, Wicked, Les Miserables, and so many more! There’s no Broadway like Forbidden Broadway. Even if you’ve never been within 1,000 miles of Broadway, you’ll still love this show!

Tickets are on sale at the Box Office, call 317-843-3800 or purchase online through www.ATIStage.org