Steve Bannon is the notorious political hack who spearheaded Donald Trump’s improbable 2016 victory in the U.S. presidential election.  To this day, Bannon maintains Trump would not be president were it not for him.  He organized the photo ops, the interviews, and (most importantly) the message.  Bannon literally ran the campaign.  He was the “behind the scenes” guy that every successful campaign needs.  Bannon was to Trump what James Carville was to Bill Clinton. 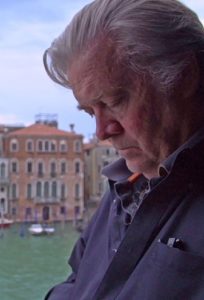 Alison Klayman’s new documentary “The Brink” follows Bannon through his busy days of scheduling, broadcasting, public speaking, influencing, guiding, and persuading.  But it begins after Trump’s election, and carries us through the 2018 mid-terms.  Bannon’s first political effort following Trump’s was that of the ill-fated U.S. senatorial campaign of racist judge Roy Moore in Alabama.  Then we follow him to a bevy of European countries, where he touts the campaigns of anti-globalism nationalist candidates.  And finally, to the Democratic takeover of the U.S. House of Representatives from last fall.

And unlike what you might think, “The Brink” portrays Bannon as one thoroughly ensconced in far right-wing nationalistic political theory; he’s not just a “handler for hire” for any candidate.  In other words, Bannon would not offer his services to Barack Obama or Bernie Sanders.  When the “Make America Great Again” crowd gathers for a rally, Bannon is truly one of them.

What is the point?

We see Bannon take questions from audience members, speak on his radio show, shout instructions to his subordinates, and enjoy photo ops with the movers and shakers of today’s Republican party.  While Bannon does occasionally speak directly to Klayman (or her cameraman), “The Brink” is devoid of voice-over narration.  Typically, this is a good thing; but here, I would have preferred Klayman use it to guide our perception of her subject.  What are we to learn from following Bannon for two years?  That he’s a workaholic?  That he’s a right-wing ideologue?  That he’s a serious taskmaster with a lighter side?

I imagine Klayman’s point is weightier.  But “The Brink” is unlikely to change any viewer’s perception of her subject.  Trump supporters will have their opinion of Bannon as a powerful but cordial political controller reinforced.  Likewise, Trump haters will see only Bannon’s occasionally prickly personality, and the rigidity of his political outlook.  I’m not sure what to make of “The Brink,” and that’s a tough synopsis of a documentary, particularly of a political figure.

I don’t know that Klayman’s film changed my preconception of Steve Bannon one iota.  I think “The Brink” probably could have worked just as well had it been made for television.

I do question Klayman’s decision to allow Bannon to muddy the meaning of the words “nationalist” and “populist.”  While it is very true that Trump (and Bannon’s other clients) are nationalists, he continually refers to them as populists.  Historically however, the Democratic party has been the party of American populism.  From William Jennings Bryan to Franklin Roosevelt, the Democrats are those who stand up for the marginalized and downtrodden.  Donald Trump was allowed to tap into the nationalistic fears of some working class white American males by posturing the Democrats as the party of elites – a task made easy by the nomination of Hillary Clinton to carry the torch of the Democrats in 2016. 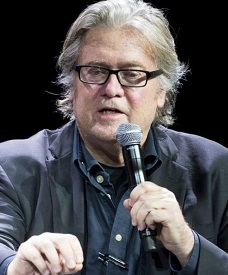 But while many Democratic voters consider Clinton’s campaign an anomaly, Bannon continues to “run” against her even so long as two years after the 2016 election.  Klayman shows Bannon constantly using Clinton’s speech in which she described some Trump supporters as “deplorables” as reason to support his clients.  But by the 2018 mid-terms, Bernie Sanders was actively carrying the torch of the party – and repositioning its proverbial weather-vane in the direction of those without health care, without a good wage, and without access to an affordable post-secondary education.

Meantime, Trump’s actions have mirrored those of other post-Reagan Republicans – a massive tax cut for the wealthiest Americans, deregulation of the financial industry, denial of climate change and environmental challenges, and an over-willingness to kowtow to religious conservatives.  These are not populist causes; these are “country club” causes.  While Trump’s nationalism is still relatively unique among GOP loyalists, Klayman never corrects – nor allows any of Bannon’s political opponents to correct – this blurring of the two words.

I can’t forgive her for this oversight, as so much of Bannon’s political clout is based obscuring their meanings.  “The Brink” might have been able to shine a light on the blind allegiance of some Trump followers – nationalists whose lives have been hurt by the rest of his policy decisions.  But by never broaching the subject, “The Brink” merely serves as a “day in the life” portrait of Steve Bannon.  We follow him, see him, and essentially live his life for ninety minutes; but we’re never allowed to question him.