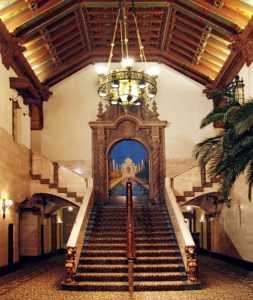 Indiana Repertory Theatre has announced its 2019 – 2020 season, which ranges from classic and beloved stories to thought-provoking and diverse work. Scheduled from September 4, 2019 to May 10, 2020, the season will take audiences on a journey through modern and historical times, realistic and magical elements, and intense and heartwarming emotions.

The Signature Six Series includes Twelve Angry Men, And So We Walked: An Artist’s Journey Along the Trail of Tears, Morning After Grace, Agatha Christie’s Murder on the Orient Express, The Paper Dreams of Harry Chin, and Jane Austen’s Sense and Sensibility. The additional productions will be The Watsons Go to Birmingham—1963,  James Still’s The Little Choo-Choo That Thinks She Can, and the return of the Indy holiday tradition Charles Dickens’ A Christmas Carol.

For the little ones

New elements this upcoming season include an expanded schedule for the Exploring Stages production The Choo-Choo That Thinks She Can to provide options for both fall and spring performances, and this year’s version of A Christmas Carol will feature certain design updates that have not happened in more than fifteen years.

Seated ticket packages are available now, and include options for the Signature Six Series. To learn more about season package benefits and to purchase, visit irtlive.com. Build Your Own packages and single tickets will go on sale later this summer.

riveting suspense
A young man’s life hangs in the balance as a trial jury meets behind closed doors to debate his guilt or innocence. Did he kill his father? Or is there reasonable doubt? What is justice, and how do we achieve it? You will be on the edge of your seat as a dozen men with different viewpoints try to agree on one verdict. This classic American drama from the 1950s could have been written yesterday with its provocative look at power, prejudice, and clashing perspectives.

The Little Choo-Choo That Thinks She Can

the magic of make-believe
A beloved story comes to life in front of your eyes as a young brother and sister, with nothing but their toy box and their own imaginations, invent a train full of friends and a big, big hill to get over. Making up the story as they go along, the two create a cast of colorful characters who try and try again until they have reached the other side of the hill. Introduce your children to the joyful experience of live theatre and the creativity of play.

And So We Walked: An Artist’s Journey Along the Trail of Tears
created & performed by DeLanna Studi
October 15 – November 10, 2019

inspiring personal quest
Join Cherokee actor and artist DeLanna Studi as she explores her personal and cultural identity while traveling the Trail of Tears with her father—and her family spirits. This one-woman play probes the complexities and conflicts that the Cherokee Nation still wrestles with today, almost 200 years after their forced relocation. Past and present intertwine with dreams, history, and legend in this frank and moving memoir of doubt and discovery.

Indy holiday tradition
A delightful ensemble of players brings Scrooge, Tiny Tim, four spirits, and all of Victorian London to life on our snow-covered stage for this holiday treasure infused with music and song. In the darkness of winter, we all need the shining light of forgiveness, redemption, and love. Come celebrate the joy of the season and the spirit of giving.

comedy with heart
Three neighbors in a Florida retirement village wake up one morning to find their lives unexpectedly tangled together, adding a new wrinkle—and a new sparkle—to their golden years. Unforeseen complications force them to confront old demons, but laughter and love will help them deal with these issues—if they can accept each other’s helping hands. Nothing is what it seems in this surprising play that shows how retirement can offer a whole new lease on life.

The Watsons Go to Birmingham—1963

based on the book by Christopher Paul Curtis

a family rooted in love
When the Watsons load their young children into the car for the long drive from Michigan to visit family in the Deep South, they take their Green Book to help plan for the prejudice encountered by black people traveling in Jim Crow America. What they don’t expect is to find themselves caught up in an act of violence that will go down in Civil Rights history. Strength and love help them face their struggles and find a path forward in this powerful drama for the whole family.

the ultimate whodunit
A luxury train trapped in a snowdrift, a dining car full of glamorous passengers, a dead body with multiple stab wounds, a suspicious intruder who keeps disappearing, and mysterious links to a far-distant murder case. Hercule Poirot, the world’s greatest detective, must interrupt his holiday to solve this fiendishly intricate and clever plot—before the snow is cleared and the train moves on. A golden-age detective story springs to life from the pages of the world’s best-selling author.

The Paper Dreams of Harry Chin

a surreal journey through past & present

Despite the US ban against Chinese immigrants, Harry Chin forged a new identity to earn precious American dollars to send home to his starving village. Now he is trapped between two families and two worlds. Seasoned with magic and mystery, this hauntingly theatrical tale from our overlooked history considers the personal and political repercussions of making a group of people illegal.

beloved romance
Three sisters and their widowed mother lose their family home and must create new lives for themselves in a tiny seaside cottage. Along the way they face kindness and cruelty, duty and deception, as they try to navigate the complex social rules for proper young ladies. What will lead to lasting happiness and true love: practical good sense or following the sensibility of your heart? Sit back and indulge yourself in the wit and wisdom, the beauty and charm of Jane Austen.