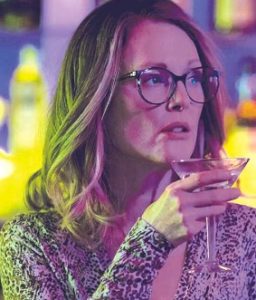 Julianne Moore plays Gloria Bell, a 50-something divorcee with two adult children – one married with a newborn, and one engaged.  Gloria lives alone in an apartment in Los Angeles and works in claims for an insurance carrier.  She spends many evenings dancing to old disco songs at a nightclub which attracts others fond of that musical era – in other words, those of her own age and interests.  Twelve years removed from her divorce, Gloria has failed to land that big, hoped-for later-in-life relationship – the one destined to carry her from middle age to the grave.  But she never gives up hope, and her spirits are almost always high.

Then one night, her eyes meet with those of another 50-something divorcee.  His name is Arnold, and he too has two adult children.  But Arnold, played by the forever underrated John Turturro, has been divorced for only a year.  And his daughters have a peculiar situation, in that they still live with their mother.  And as Gloria and Arnold deepen their relationship, Arnold never tells his daughters he’s falling in love with another woman.

In Sebastian Lelio’s new film “Gloria Bell,” Gloria and Arnold are simply at two different places in their lives.  Gloria is completely free; whereas Arnold is still tethered to a past he longs to escape.  In fact, Gloria is so unfettered that she brings Arnold to her son’s family birthday party/get-together – where Arnold meets Gloria’s ex-husband Dustin (a marvelously subdued and earnest Brad Garrett) and his wife Fiona (Jeanne Tripplehorn).  It’s all a little much for Arnold.  How will he handle this new relationship with such a free spirit?  Will he be able to sever his ties to his past life enough to fully embrace the new?  How long will Gloria be able to limp along in relationship limbo with Arnold before he fully devotes himself to her?

One of year’s best so far 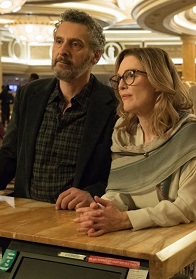 These is the stuff of one of the best films to hit the screen so far in 2019.  Lelio – the Chilean director responsible for 2017’s Spanish-language film “A Fantastic Woman” (starring Daniela Vega) – mines every last ounce of energy and effort out of Julianne Moore, one of our greatest living actresses.  Not that I would expect anything less, but “Gloria Bell” marks another career achievement for Moore.  And John Turturro disappears into his meatiest role in years.  It’s the type of sad-sack character Woody Allen would parody; Turturro plays it straight, and nails it.  We’re never quite certain what secrets Arnold is withholding from Gloria; whereas we know she’s placed all her cards on the table face-up.

Not what we expect

The trajectory of their affair is not what we expect – and Lelio (who wrote the screenplay with Alice Johnson Boher) doesn’t wrap it up in a nice Hollywood-style ending.  These are real people – fully-defined characters with real lives, and real depth.  And how refreshing to see 50-something characters in a film that aren’t simply there for old-fart jokes and comic relief.  They are the stars of “Gloria Bell.”  Yet on the flip side, the adult-children characters are not one-dimensional hip-hop era cardboard cutouts either; they are fully-realized and fleshed-out personifications as well.

Complaint about the music

My one big complaint with “Gloria Bell” is the music.  At first, it’s fun to see Moore sing along with ‘70s and ‘80s songs in her car and in her apartment.  But eventually we realize the music has been selected to match Gloria’s feelings of the moment.  After a good date with Arnold, she sings along to Paul McCartney’s “No More Lonely Nights.”  After a particularly stressful evening with him, she listens to her musically-inclined children perform an impromptu send-up of Gilbert O’Sullivan’s “Alone Again Naturally.”  A little of this matching of song and situation goes a long way.

And the screenplay falters just slightly toward the end as Gloria does a couple things that seem out of character.  But my overall impression of this film is very positive.  I can’t wait to see what else Sebastian Lelio has up his sleeve.  And as usual, I eagerly anticipate Julianne Moore’s next picture.  In the meantime, “Gloria Bell” is a winner – and one of my favorites so far in this young motion picture season.