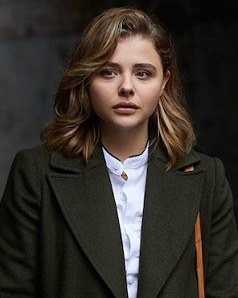 Okay, how’s this for a set-up?  Chloe Grace Moritz plays Frances – born and raised in Boston but now living in New York with her friend Erica (Maika Monroe) and maintaining a job as a waitress.  Frances doesn’t appear to have much social life, but then she’s just lost her mother less than a year previous.  Her relationship with her father (Colm Feore) is not great.  Yes, they communicate, but keep each other at arm’s length.

One day, Frances finds a seemingly abandoned purse on a subway seat, which she insists on returning to its rightful owner – much to the displeasure of Erica (hardened by a life in New York), who assumes it’s a trap, set-up, or other form of dishonesty.  Turns out the purse belongs to Greta, a widowed piano teacher, played by the great French actress Isabelle Huppert.  Greta invites Frances for coffee, and the two hit it off well.  Ironically, Greta misses her daughter, who is studying in France.

Frances seems to fill the void left by Greta’s own absent daughter – so much so that Greta won’t leave Frances alone.  She calls her cell phone and landline countless times a day, follows her to work and to her apartment, and begs her to become part of her life.  Greta is obviously lonely, but to the dismay of Frances, she turns out to be a stalker.

This is the premise of Neil Jordan’s latest film, “Greta,” a picture which misses a fine opportunity to explore the depths of psychological illness and psychopathic behavior, and instead opts to take the cheap and easy way out by transforming into a routine horror movie.

Similar to “Get Out”

I recall the point in Jordan Peele’s acclaimed 2017 film “Get Out” in which the black protagonist’s white girlfriend turned out to be “in” on the plot to confine him to her wealthy parents’ mansion.  It was at this point “Get Out” ceased to be an interesting examination of how some white people view African-Americans, and devolved into a routine horror story.

I feared such a revelatory scene in “Greta,” and sure enough the French stalker soon kidnaps young Frances, and confines her to a secret room behind her piano.  But I was pleasantly surprised to learn this was merely a dream – a figment of Frances’ imagination.  Often our own fear is more frightening than our reality – and this would appear to be the case with Jordan’s and Ray Wright’s original screenplay.  Could this scene be a launching pad to a greater exploration of Greta’s mental illness?

Alas, no such luck.  Unfortunately, “Greta” devolves into yet another horror film, wasting the talents of Huppert and Moritz.  The last half-hour of this film should have been discarded and completely re-written to genuinely explore Greta’s state-of-mind.  Frances and her roommate could have been instrumental in getting her the help she needs.  Such a calling could have been the catalyst that re-unites Frances with her father.

Instead, once the roommate and the father realize Frances has been kidnapped, the police and legal system turn out to be no help.  Dad hires a private investigator, played by Jordan regular Stephen Rea.  Greta thwarts his efforts, and continues to confine Frances in her hidden room for no apparent reason.  After all, if Frances isn’t enjoying these proceedings, what benefit do they serve for Greta?

As the plot disintegrates into the realm of the ridiculous, our interest wanes to the point we hardly care if and how Frances makes her escape.  And that’s a shame, given the taut establishment of plot during the film’s first hour.

Jordan was the writer and director behind “The Crying Game,” my favorite film of 1992.  He’s churned out some good work in the intervening years, but nothing else on that level.  “Greta” will certainly not mark his return to the top echelon of filmmakers.