Coming less than four years after Richard Glatzer’s “Still Alice,” I wondered why we needed another Hollywood treatment of the effects of Alzheimer’s Disease.  Suffice to say I was pleasantly surprised and very disappointed in Elizabeth Chomko’s new release “What They Had.”  Surprised because Chomko’s original screenplay is not simply a retread of “Still Alice;” disappointed because she cheats us out of the movie we deserve to see.  More on that in a moment. 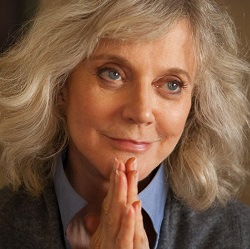 Where Julianne Moore’s early-onset Alzheimer’s patient was the star of “Still Alice,” Blythe Danner’s version is merely a supporting character.  Don’t get me wrong, Danner realistically conveys the horror (and occasional laughter) associated with ever-worsening memory loss.  But the star here is two-time Best Actress Oscar winner Hilary Swank as Bridget, Danner’s daughter, who hops a plane from California to Chicago in the middle of the night when her mother Ruth (Danner) disappears.  The bulk of “What They Had” concerns the tug-of-war between Bridget and her brother Nicky (Michael Shannon) versus Ruth and her husband Burt (Robert Forster).  Bridget and Nicky realize it’s past time to institutionalize Ruth; the parents see things differently.

While this is a dilemma faced by many seniors and their children, Chomko’s screenplay does provide us with some intriguing characters.  Forster’s Burt is well-meaning and strong-willed – perfectly aware of the situation, but patently denying he’s incapable of fully caring for his wife.  Shannon’s Nicky is a never-married tavern owner who’s shouldered the bulk of the parental care – given Bridget’s remote location, and her husband and college-aged daughter Emma (Taissa Farmiga, sister of Vera).

Shannon seems out of place 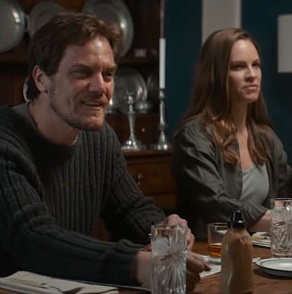 As expected, Shannon’s character is more than a bit rough around the edges.  His tendency is to paint every situation in black and white terms.  This time, he needs his sister to convince Mom and Dad that it’s time for some form of assisted living.  It’s always entertaining to watch Shannon, although he comes perilously close to overplaying his hand a few times during the course of “What They Had” – not as severely as he did in “Revolutionary Road,” but close enough to walk that thin line between remaining within the confines of the rest of the cast and seemingly dropped in from a completely different movie.

But my chief complaint isn’t with Shannon.  My issue is with Chomko’s screenplay – or lack thereof.  The dramatic tension is drawn from Swank’s Bridget.  She’s the one who must (politely and delicately) convince her parents of the urgency behind selling their condo and moving into assisted living.  They already know Nicky’s opinion.  And they don’t like it.  Bridget must conjure the backbone to face their inevitable denial of the severity of their situation, while successfully convincing them that severity exists.  And heaven knows Swank is the perfect actress to pull off such a “big scene.”

But that scene never materializes.  Just when we begin to tire of the back-and-forth of Nicky vs. the parents (with Bridget as the Great Mediator), Nicky goes home for the evening, leaving Bridget alone with Mom and Dad.  Here comes the dramatic moment the screenplay practically begs for.  But it never happens.  Without spoiling the ending, suffice to say that Chomko’s screenplay replaces Swank’s “big scene” with a couple health crises that make the decision easy for Mom and Dad.  As a proud champion of the dramatic arts, I feel cheated!

Then, just to stroke my ire, Chomko does it a second time!  Throughout her week-long stay in Chicago, Bridget develops a fondness for an old classmate she meets in church – causing her to re-think her loveless marriage back in California.  When Bridget finally returns to her husband in California, Chomko doesn’t even bother to write that scene either!

Chomko, a playwright and theatre actress, should know better.  Either she’s a screenwriter or she’s not.  In “What They Had,” she’s given us a compelling story line with an intriguing set of characters – and then refused to compose an ending to their story.  What a shame!  This picture has so much potential – with an excellent ensemble cast.  To throw it all away like this is a dramatic crime.  Chomko is guilty, and as a viewer, I feel robbed of the rest of the story.  I liked a lot about “What They Had.”  Unfortunately, I can’t recommend it.