Three years ago, I wrote that Adam McKay’s “The Big Short” was a compelling film about the 2008 financial crisis, but that all the asides (when actors – some of whom don’t even play characters in the film – speak directly to the audience) “not only upsets the flow of the movie, but it reduces the material to a joke.  It isn’t.  Investors lost their life savings during the financial collapse of 2007-2009, and their plight should be treated with a sense of reverence absent in ‘The Big Short.’” 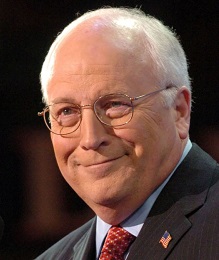 Now McKay has given us “Vice,” a biopic about former Vice-President Dick Cheney – perhaps the most powerful man in the world during the George W. Bush administration – and while none of the actors speaks directly to the audience, there’s still a sense of “You are watching a movie.”  There is but one narrator (whose relationship to Cheney won’t become known until almost the ending) this time, but even his presence is disruptive.  He says nothing that couldn’t have been covered by a smarter screenplay.  In other words, his lines could have (and should have) been written into the dialogue of the actual characters on screen. 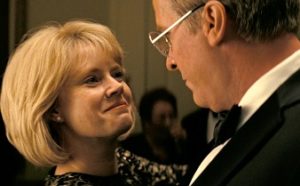 The chameleonic Christian Bale plays Cheney, Amy Adams (who co-starred with Bale in “American Hustle”) is his wife Lynne, and Steve Carell (along with Bale, another McKay regular) practically disappears into the role of former Defense Secretary Donald Rumsfeld.  Bale and Carell are excellent as the two young politicos who secure top positions in Gerald Ford’s administration.  McKay’s original screenplay then follows them through the end of the George H.W. Bush administration before he makes the egregious mistake of imagining an ending to the Cheney story in which Dick and Lynne happily retire to their ranch in Wyoming – complete with phony closing credits – when the phone rings in the middle of the night.  It’s George W. Bush’s call asking Cheney to be his running mate.

This is where the meat of the Cheney story begins.  Yet McKay ruins it by immediately preceding it with the fake closing credits.  I’m sure this sounded funny on paper; but it wrecks the flow of the film, in practice.  Again, McKay lets us know we’re watching a movie about Dick Cheney – resigning the material to fodder, and diminishing its value as an historic drama and teaching tool.  In other words, if McKay doesn’t take his source material any more seriously than this, how can we?

And that’s a shame, particularly since the G.W. Bush years allow us the opportunity to witness the damage Cheney inflicted upon not only the United States but also the world.  There is a theory that Cheney was aware of – and even may have helped plan – the World Trade Center disaster of 9/11/2001.  As that remains (to my knowledge) merely a theory, I’m glad McKay doesn’t go there.  But he does highlight Cheney’s persuasive powers over the rest of the cabinet to use the 9/11 disaster as a jumping board for the 2003 invasion of Iraq – a country which had nothing to do with 9/11.

Where Barry Levinson’s 1997 film “Wag the Dog” was about a fictitious war fabricated to distract the American public from a presidential sex scandal, the Bush-Cheney administration “wagged the dog” in real life by fabricating the Iraq war as a response to the 9/11 crisis.  And, as “Vice” identifies, the more the administration made the connection, the more poll numbers showed the American public actually believed Saddam Hussein was, in part, responsible for 9/11.  The turning point, of course, occurs when Secretary of State Colin Powell (Tyler Perry, of all people) goes before the United Nations to present phony intelligence that Saddam Hussein was harboring weapons of mass destruction.

These were scary times for democracy – but Cheney (a young and upcoming public servant in the waning years of the Nixon administration) firmly believed in an all-powerful executive branch, not tied to any checks and balances by Congress.  To no great surprise, a young U.S. attorney by the name of Antonin Scalia was a young cohort of Cheney’s who worked this theory from the legislative side.  Short shrift is given to Cheney’s involvement with Halliburton – the firm that profited mightily from its “clean-up” of Iraq following the early days of heavy fighting.  McKay does point out that U.S. forces killed far more Iraqi citizens than did ISIS during the Obama administration.

Nothing more than satire

This is heavy material – particularly since it occurred so recently in our nation’s history.  Perhaps “Vice” is a warning that we never allow such corruption to happen again.  If McKay were to strip away the narrator, run the screenplay through the proverbial editing mill another time or two, and completely eliminate the phony ending halfway through the film, he might have something as hard-hitting as “Schindler’s List.”  Unfortunately, “Vice” never digs deep enough to be considered as anything more than political satire.

Furthermore, I’m not sure I learned anything about Dick Cheney that I didn’t know – or couldn’t have imagined – before I watched “Vice.”  For example, I wasn’t aware that it was Dick Cheney who replaced the term “estate tax” with the more egregious “death tax” – in an effort to rally public support around eliminating a tax which hurts only those whose estates are worth more than $2-million.  Or that it was Cheney who replaced “global warming” with the less-alarming phrase “climate change.”  But neither revelation surprised me.

Material should have been presented seriously

In this way, “Vice” is only a marginally superior film to the recent “Bohemian Rhapsody” – the Queen biopic in which I learned absolutely nothing about the brilliant mind of the late musician Freddie Mercury.  There’s a lot of good material in “Vice,” and it’s depressing to watch one man practically destroy our democracy.  But this information needs to be presented in a serious manner – not as a joke.  I realize this is satire, but “Vice” is practically a cartoon with actors.