2018 has certainly been a year of similarly-themed films.  Both “The Miseducation of Cameron Post” and “Boy Erased” dealt with so-called gay conversion therapy.  The documentary “RBG” and the forthcoming “On the Basis of Sex” each highlight the career of U.S. Supreme Court justice and civil rights leader Ruth Bader Ginsberg.  Now comes “Ben is Back” – the second film this fall to focus on the horrors of hard drug abuse.

Seemingly picking up where “Beautiful Boy” left off, “Ben is Back” begins with the abuser (Ben, played by the versatile and omnipresent Lucas Hedges) returning to his family one Christmas Eve.  Ben has already been through the throes of his abuse, and he’s now seemingly breezing through a successful stint at a halfway house where he is under constant supervision and subject to frequent therapy sessions.  Ben’s mother Holly (Julia Roberts, in one of the finest performances of her career) is delighted to have Ben home – but apprehensive enough to hide her prescription medication practically before Ben even sets foot in the house.  Ben’s sister Ivy (Kathryn Newton, in an understated but very effective appearance) and step-dad Neal (Courtney B. Vance) aren’t so sure.  Apparently, Ben has “ruined” the past two Christmases.

Still, Ben seems to be a model big brother – roughhousing on the floor with his young step-siblings, and playing with the family dog.  But during a trip to the mall to purchase a couple last-minute Christmas gifts, Ben runs into a couple of his old drug-selling and drug-abusing connections.  Unable to completely erase his troubled past, Ben asks Ivy to check a certain area of the attic to make sure his old paraphernalia has been removed.  He even has his mother take him to a support meeting after he receives a stern phone call from his sponsor.

Up to this point, “Ben is Back” successfully depicts the post-abuse recovery portion of the life of an abuser – whereas “Beautiful Boy” concentrated more on the beginning stages of abuse.  “Ben is Back” takes a wrong turn, however, when the family returns home from Christmas Eve service at church (where Ivy sings a beautiful rendition of “O Holy Night”) – to discover their Christmas tree toppled, ornaments broken, and the family dog missing. 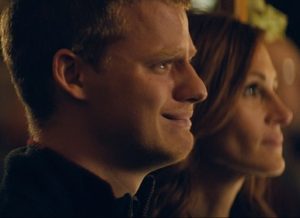 Ben (and the rest of the family) is certain this burglary occurred because of his checkered past.  Not wanting to burden his family anymore, Ben runs away – back to his treatment center.  Holly drives into the night to find Ben and then offers any help she can provide to “correct” his situation and bring home the dog.  This involves a night of reconnecting with Ben’s old drug-seller lowlifes, including a pawn shop owner to whom Ben is financially indebted.

I have no problem with including Ben’s old haunts in the screenplay.  After all, if the point is that it’s impossible to escape the past even after successful recovery, then they should be included in the story.  But the theft of the family dog sets up the final act of “Ben is Back” as a caper film – one with too much plot, and not enough quiet time of reflection.  Don’t get me wrong – Hedges and Roberts are fantastic in their roles.  But director Peter Hedges’ original screenplay takes a very wrong turn by placing its characters in a “beat the clock” situation to try and return the dog in time for Christmas morning.  As Ben and his mother galivant about town all night, Neal and Ivy stand by nervously as the young children try to sleep.  Ironically, not one family member calls the authorities.

Not a hopeful ending

And much as “Boy Erased” touched on the difficulty of staying clean during recovery, “Ben is Back” eventually does the same, although I believe I would have preferred a more hopeful ending.  If “Boy Erased” was the heavy-hearted warning against the abuse of hard drugs, it would have been nice for “Ben is Back” to bring a ray of hope to families dealing with this horror.  I realize the filmmakers had no collaboration, but I know people successfully recover and rejoin society.  I’d like to see a film highlight such a success.

As far as “Ben is Back” is concerned, I can’t recommend it.  Hedges (who is Lucas Hedges’ father) is a novelist, playwright, and screenwriter.  He should have known better than to take his screenplay in the direction of a standard crime-caper.  Drug abuse is simply too important a topic to trivialize it in such a manner.  While “Boy Erased” is not an easy film to watch, it is the superior achievement of the two.