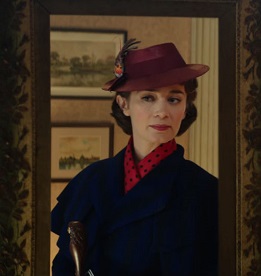 This might just be a record.  The original “Mary Poppins” was released clear back in 1964.  Now comes the sequel – a mere 54 years later.  Why?  After all this time?  Well a lot of it has to do with Disney’s recent trend of re-making its own classics.  Typically, this involves creating new live-action versions of animated features – the recent “Beauty and the Beast” would be a good example.  The 2017 version was great, but the 1991 original still stands as perhaps the best animated feature of all time – rendering the newer version useless, save for a marketing ploy to line the pockets of Disney execs.

But “Mary Poppins Returns” is a new feature – not simply a remake.  Or is it?  Emily Blunt stars as the mystical, magical nanny – returning to the same family as she did in the original.  And here I should mention the sequel is set a mere twenty years later than the original – as opposed to the 54-year real-time gap.  Channeling Julie Andrews, Blunt maintains the stiff upper lip of a British nanny, while peppering the children with magic tricks she claims not to see herself.

Ben Whishaw plays grown-up Michael Banks – still living in the same family house in the heart of London.  He’s a teller at his father’s old bank, but this is the 1930s and times are hard.  The bank has given Michael just a few scant days to vacate, lest he fulfill a loan in its entirety.  This “losing the house” backdrop provides more of a plot structure than the original – whose theme seemed nothing more than “children need to have fun.”

There’s another serious undertone in “Mary Poppins Returns,” in that Michael’s wife has recently passed away, leaving his three children without a mother.  (No, I don’t know why screenwriter David Magee deemed three children necessary this time, as opposed to the two kids from the original; but they are all very talented and cute.)  Michael’s older sister Jane (Emily Mortimer) has moved in, but she’s consumed with the burgeoning labor movement – much as her mother was with the women’s suffrage movement in the original.  Mortimer’s Jane has more of a presence in the sequel than Glynnis Johns’ Mrs. Banks character from the first go-round, and the depth of Whishaw’s Michael is an improvement on David Tomlinson’s persnickety one-dimensional Mr. Banks character.

Dick Van Dyke’s Bert character has been replaced by Lin-Manuel Miranda’s Jack – a lamplighter this time, rather than a chimney sweep.  Much as with Bert, he’s very fond of Mary Poppins, but this time he develops feelings for the unmarried Jane Banks.  Blunt and Miranda are every bit as enticing as Andrews and Van Dyke, and their well-staged musical numbers are absolutely delightful. 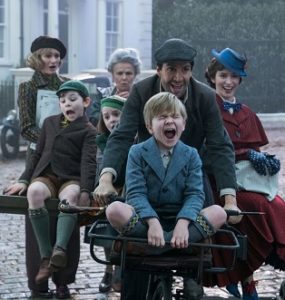 The music this time has been written by Marc Shaiman, who brought “Hairspray” to Broadway.  But Richard M. Sherman (of the Sherman & Sherman musical team that composed the music from the original) served as “musical consultant.”  Sherman may be 90 years old, but his fingerprints are all over this music.  It is (thankfully) derivative of the original score, and features some very good songs – although none will be the classics of “Spoonful of Sugar” or “Chim Chim Cher-ee.”

See it on the big screen

“Mary Poppins Returns” is every bit as magical as one might expect.  This is a film which must be seen in a theatre to take in the full effect.  Even a wide-screen television simply won’t do it justice.  The set-pieces and musical numbers are a treat, and while the story line is ever-present, the plot doesn’t bog down the movement of the musical numbers.

My only complaint about this achievement is that every scene exactly mirrors a similar scene in the original.  Instead of the “Spoonful of Sugar” scene, Mary Poppins takes the children on an ocean-themed thrill ride of a bath.  Instead of Mary, Bert, and the kids jumping into a sidewalk chalk drawing for the “Jolly Holiday” sequence, Mary, Jack, and the kids jump into a painted bowl to sing and dance with some of the very same cartoon characters as in the original.

Ed Wynn’s Uncle Albert character has been replaced (and improved upon) with Meryl Streep as Mary Poppins’ cousin Topsy.  But instead of all the furniture floating to the ceiling, the entire house turns upside down.  The men’s “Step in Time” dance number has been replaced by a “Trip the Light Fantastic” number that certainly rivals its predecessor – although does not necessarily improve upon it.  And the “Let’s Go Fly a Kite” ending is now “Nowhere to go but Up” – a similarly-themed denouement in which Mr. Banks realizes that he needs to lighten up, have more fun, and pay more attention to his children.

Why mess with perfection?

I can’t say I expected “Mary Poppins Returns” to drift drastically from the first feature, but I guess I expected a few more surprises.  Everything is perfect here; but almost too much so.  On the other hand, the original “Mary Poppins” rivals “Singin’ in the Rain” as the greatest straight-to-celluloid musical ever made – so why mess with perfection, right? 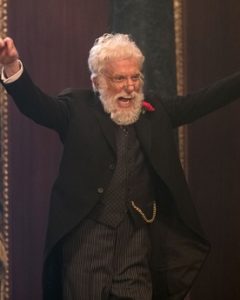 It is but no means necessary to have seen the first picture to enjoy “Mary Poppins Returns.”  But when Mary first appears floating over the streets of London with her parasol, a knowing audience will cheer.  In fact, many of the musical set pieces will garner applause.  And when 91-year-old Dick Van Dyke reprises his role as banker Mr. Dawes, parents and fans will go wild.

Interestingly, Julie Andrews does not appear in this sequel/remake (although I don’t know how you’d work her in), but Angela Lansbury does.  I know, she was in “Bedknobs and Broomsticks,” not “Mary Poppins.”  But then, if any non-Poppins person deserves a spot here, it’s Lansbury.  British actor David Warner reprises Reg Owen’s Admiral Boom character, even though the character really has never been necessary.

Again “Mary Poppins Returns” is everything one would expect from a sequel to the 1964 classic.  It’s magical, mystical, and musical.  Kids and parents alike will love it.  This is Disney magic at its absolute greatest.  Now, given the talent involved in making this film, I wonder aloud:  What kind of brand-new, never-seen-before Disney production could Emily Blunt, Lin-Manuel Miranda, Marc Shaiman, and director Rob Marshall produce?  I continue to wait with baited breath.