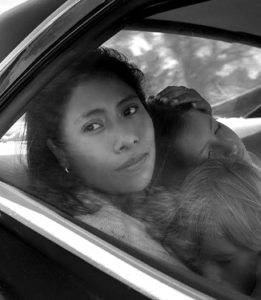 As the opening credits roll, Alfonso Cuaron’s camera is focused on a garage floor.  Water begins to cascade across this particular section of floor; it is obviously being washed.  As the credits fade away, the hose is turned off, and in the reflection of the water, we see an airplane flying overhead – not making a sound, as it is simply too far away to affect the ground-level activity below.

This cinematographic symbolism personifies the epic journey upon which we are about to set sail.  Cuaron (director of the excellent Sandra Bullock vehicle “Gravity”) has created one of 2018’s masterpieces – “Roma,” named for the Colonia Roma district of Mexico City.  In “Roma,” Cuaron’s camera (He is his own cinematographer) is the airplane of the opening sequence – watching from a distance; never passing judgement; observing even the most minute details of a life so foreign to most American audiences it may as well take place in Biblical times. 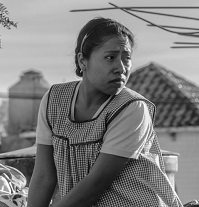 But this is Mexico City in 1970.  And Cuaron’s autobiographical offering centers on Cleo, a live-in domestic for a well-off doctor’s family.  Early scenes depict Cleo cleaning, cooking, taking the kids to school, and tucking them into bed at night.  The four children love their parents, but they also love Cleo.  She is obviously considered a member of the family – yet her place as a servant is never underestimated.  Parents Teresa and Antonio occasionally lash out at Cleo for subpar housework.  They love Cleo… but she has her place in society, and the parents have theirs.

Cleo and fellow maid Adela spend some of their daytime hours (when the kids are in school and the parents are at work) in the city with their boyfriends.  Cleo’s beau Fermin takes a shower curtain rod and hilariously shows off his martial arts skills to Cleo one afternoon in a hotel room.  On another occasion, Cleo informs Fermin that she believes herself to be pregnant.  For all intents and purposes, we will not see Fermin the remainder of the film.

Fearing her work with the family to be in jeopardy, Cleo is hesitant to break the news to Teresa – particularly since Antonio appears to be having an affair.  But when she does, Teresa immediately assumes the role of supportive friend – almost a sister, albeit with the caveat that Cleo is still, and always will be, viewed as a member of the servant class.

For a film without an overarching plot, there’s a lot going on in “Roma.”  And the film is shot exquisitely.  Cuaron opts for a wide-angle lens through most of the picture, allowing us to see multiple rooms of the house at once – even though there may be activity in only one of them.  Likewise, when Cleo learns of her pregnancy, she sits alone in the city, burying her head in her hands.  But rather than focus his camera on Cleo alone, Cuaron shows all the activity of the city around her in the same frame – the busy diner behind her, the mariachi band to her left, and so forth.  While Cleo is the primary focus of “Roma,” she is never truly alone.  The city, her family, her boyfriend.  There is always something else framed with Cleo – as if to depict that she really doesn’t have her own personal space.  Her life is in service to others.

This reality is not depicted in terms of “good” or “bad,” however.  It simply is.  And part of the reason is that the bustling city is practically a character in and of itself.  Its student protests, frequent gun violence, and earthquakes are all portrayed as interconnecting pieces to the rhythm of life in Mexico City.  Residents don’t seek to leave the city to escape the violence or the seismic activity; they simply accept these as elements of their daily existence.

Every camera shot of “Roma” is intentionally framed.  In the film’s most powerful scene, Cleo (who has already announced she can’t swim) is tasked with rescuing the youngest daughter in the ocean during a family beach vacation.  Cuaron’s inclusive camera shows us the distance between Cleo and the child – and each wave that smacks Cleo in the face seems to give her the extra strength required to reach her goal.  Where others may give up in the midst of so much oppression and resistance, Cleo summons the inner strength to continue.

And that’s the real meat of “Roma.”  Life goes on whether we like it or not.  Life is filled with challenges.  How we face these challenges defines us.  “Roma” is a special, life-affirming film that ranks as one of the year’s finest achievements, and establishes Cuaron as one of the world’s greatest active filmmakers.