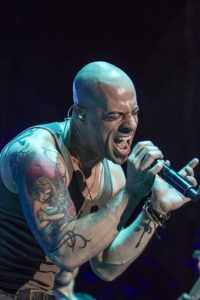 Daughtry’s self-titled debut was the best-selling album of 2007, which contained four Top Twenty hit singles including the Grammy-nominated smash “It’s Not Over.” “Leave This Town” also reached Number One in 2009, while 2011’s “Break the Spell” was certified gold. His group’s most recent record, 2013’s “Baptized,” featured the platinum-selling “Waiting for Superman,” which the singer points to as a turning point in his songwriting. The band’s fifth studio album, “Cage to Rattle,” Daughtry describes in its early stages as having a “bluesy, almost rootsy undertone to it.” For this album, they look to contemporaries like Maroon 5 and Train as examples of acts able to maintain their relevance while rock & roll faces an uphill struggle in the mass media. “Those guys are inspirational, showing that you can come back and have a strong presence, even if what you’re known for is having a hard time,” he says. “Cage to Rattle” will be released July 27, 2018.