It’s been five years since British director Steve McQueen’s Oscar-winning masterpiece “Twelve Years a Slave.”  I’ve been chomping at the bit waiting for McQueen’s next offering.  Would he do like Steven Spielberg, who followed his classic “Schindler’s List” five years hence with the equally as brilliant “Saving Private Ryan?”  Alas, no.  McQueen’s new gift to filmgoers is a slicky-produced and well-acted, but ultimately very average heist flick known as “Widows.”

Based on a British television series from the 1980s, McQueen’s and Gillian Flynn’s original screenplay follows three widows whose criminal husbands have recently lost their lives in a tragic accident following a job-gone-wrong.  The most well-known of the thieves is a man named Harry Rawlings, played by Liam Neeson.  His widow Veronica (a smart but headstrong Viola Davis) is threatened by crime boss Jamal Manning (Brian Tyree Henry), who happens to be running for alderman in his Chicago district.  One would presuppose that, even in the corrupt world of Chicago politics, physical threats and hitmen would not enter the picture.  But do they ever!

Tasked with producing two million dollars to replace that which burned in the accident that took the life of her husband, Veronica opts not to approach the authorities.  (I know the Chicago police are inherently corrupt, but what about the FBI?)  Instead, she convenes a meeting of the other three recently widowed criminal wives and shares her plan to carry out a heist which would have been the guys’ next hit.  You see, Harry kept detailed notes of every job he and the gang ever pulled off – and always planned ahead for the next robbery. 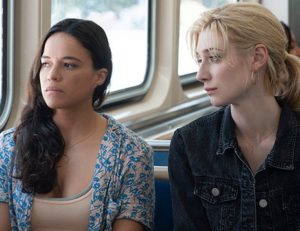 So, thanks to plot conveniences, we have the implausible set-up for “Widows.”  One of the girls simply isn’t up to attempting high crime, but the other two, each facing financial difficulties without the somewhat constant influx of their husbands’ “earnings,” are game.  They are Linda, played by Michelle Rodriguez, and Alice, the only truly interesting character of this entire effort.  She’s played by Australian actress Elizabeth Debicki, in her best screen role to date.

The determined women achieve masterful results in their planning stages, and even draft a fourth accomplice, Linda’s babysitter Belle (Cynthia Erivo), whose recruitment late in the film begs the question, “Who is now watching Linda’s children?”

But the overall result of “Widows” is that a lot of effort (and money) has been put into it, but very little substance comes out the other end.  “Widows” is a dark, serious film, which could use a little humor to provide levity.  And McQueen gives us no characters –save for that of Debicki’s Alice – to care about.  Even Jamal’s rival in the upcoming alderman race is an unlikable heir apparent to the district his father and grandfather both served.  His name is Jack Mulligan (Colin Farrell), and he had some “business” dealings with Harry, which seem to dial up the level of Jamal’s hatred of Veronica.

But I suppose my greatest complaint is that, much as in Paul Feig’s recent “A Simple Favor,” a character killed off early in the film turns out to be miraculously still alive later on.  His status as “alive” is the only way the final act of “Widows” is able to work and still make sense.  When writers (and McQueen and Flynn are both very gifted) resort to bringing back characters we thought were dead, they pull the proverbial rabbit out of the hat.  Effectively-written screenplays don’t need to resort to this amateur level of writing to bring home a strong ending.  I’m disappointed in McQueen that he has stooped to this level.

Again, Debicki’s Alice is a gem of a character.  She resorts to a life as an escort when her husband dies in the early stages of the film.  Her relationship with wealthy real estate developer David (Lukas Haas) is the only truly entertaining offshoot of the primary plot.  I would have preferred to see a romantic comedy about the two of them, rather than the plot-heavy and overly burdensome film McQueen has given us.

After “Twelve Years a Slave,” I expected more from McQueen.  I’m not saying everything he does from now on must be gold-plated, but following “Slave” with “Widows” would be like Spielberg waiting five years after “Schindler’s List,” and then churning out “Ready Player One.”  “Widows” might have been a passable first effort, but McQueen is simply too good a director (and writer) to be wallowing in heavy-handed heist films with almost no enjoyable characters and complex plot lines.