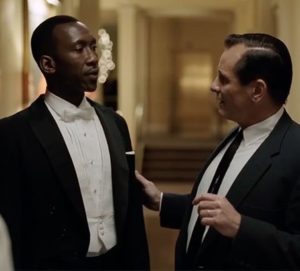 Tony Vallelonga is a bouncer at the Copacabana nightclub in downtown Manhattan.  His friends call him “Tony Lip.”  Tony’s not in the mob, but he’s close enough with some of the major players to be dangerous.  He knows the mafia’s movers and shakers, and they know him.

But unlike the hardened criminal element of the mob, Tony is a family man.  He’s a loving and devoted husband to his wife Dolores and his two sons.  He’d do anything for them – including not becoming too deeply involved in underworld activity.  For example, when given the chance to “score a big hit” for a mafia don, Tony instead pawns his watch for fifty bucks to buy Christmas gifts for his family.  Even with the big money within reach, Tony prefers to play it safe.

Then comes a two-month shutdown as the Copacabana closes for revisions during the fall of 1962.  Some of the other employees take temporary jobs in family businesses; others don’t know how they are going to make ends meet.  Including Tony.

And then he receives a call from a friend who advises Tony (a former sanitation truck driver) that a local doctor is seeking a driver for a two-month position.  Tony applies, but the doctor apparently lives above Carnegie Hall.  Confused, Tony interviews anyway, and soon discovers that this is no medical doctor.  He will be driving famed pianist Donald Walbridge “Doc” Shirley on a two-month tour of venues in the Midwest and Deep South.  Easy money, right?

But you see, Doc Shirley is black.  And he’ll be traveling through the South.  In 1962.  Not only does Doc need a chauffeur – he needs a bodyguard.  And Tony Lip (or Tony The Lip, as Doc inadvertently calls him) comes highly recommended.

After these set-up scenes, we can practically guess where Peter Farrelly’s “Green Book” is headed.  Uptight and well-educated Doc will clash almost instantly with street-smart Tony and his egregious ways.  But Tony will save Doc from several close calls with racist Southern hillbillies.  And Doc will teach Tony a thing or two about culture.  The two will grow closer together, and emerge as friends.

And you would be exactly correct.  But don’t let the predictability factor keep you away from “Green Book.”  This is one of the most thoroughly entertaining films of the year.  It’s sort of a “Driving Miss Daisy” in reverse.  This time, the white person drives the black person.  But no matter; this is still the Deep South.  And the Civil Rights Act was still two years away.

The title “Green Book” is taken from an actual publication known as “The Negro Motorist Green Book,” which listed establishments (motels, restaurants, and stores) friendly to African-Americans during the years of segregation in the South.  Doc presents Tony with a copy, and Tony books Doc in some of the most run-down inns imaginable, while he holes up at the closest “white” motels available.  It’s a dicey arrangement, particularly when Doc ventures away from his lodgings – to a local bar, or the YMCA.  Eventually, Tony makes Doc promise to never leave his roadhouse without utilizing his bodyguard services.

The ensuring adventures often feature comic elements, but are always pathetic as we are witness to the ways innocent black people used to be treated.  Unfortunately, it’s all too easy for us to make the mental leap to today’s society, in which much has changed, yet racism and a certain amount of institutional segregation still exists.  “Green Book” is as much a motion picture about present times as it is 1962. 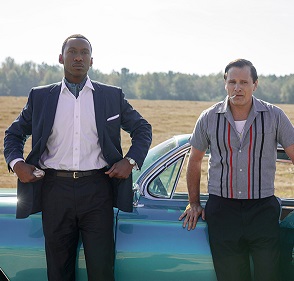 As Tony, Viggo Mortensen turns in the best performance of his career.  He plays Tony with the requisite boisterousness of a cunning Italian New Yorker, while at the same time desperately missing his family.  As Doc, Mahershala Ali (2016’s Best Supporting Actor Oscar winner for “Moonlight”) hits all the right notes as the rigid artiste, unable to relate to his fellow African-Americans, yet never to fully revel in the world of the bourgeois due to the color of his skin.

And in the film’s finest supporting role, Linda Cardellini excels as Tony’s loving and devoted wife Dolores.  Her love for Tony deepens with each letter he writes – particularly once Doc begins helping Tony with his spelling, grammar, and the overall floweriness of his speech.  Tony’s letter-writing is a cute side-story, but it’s also the figurative glue that holds this narrative together.

Written by Farrelly, Brian Hayes Currie, and Tony Vallelonga’s real-life son Nick, “Green Book” is one of the year’s best mainstream pictures.  And Farrelly seems an odd choice to direct.  He and his brother Bobby are responsible for some of the rudest, crudest, gross-out comedies of the past twenty years, including “Dumb and Dumber,” and “There’s Something About Mary.”  But Farrelly keeps the idiocy in check here, in favor of some good old-fashioned movie-making.

“Green Book” would actually work well as a companion piece with “Driving Miss Daisy.”  Both are crowd-pleasers; both are supremely well-written and well-acted; and both teach us a thing or two about racism in today’s society by utilizing stories of the segregationist South.  Check out “Green Book” for a heartwarming time at the movies.