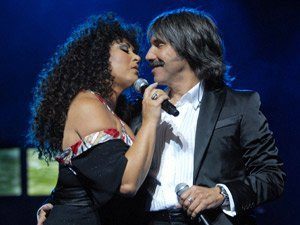 Amanda Miguel is an Argentine-born Latin pop singer who rose to fame in the early ’80s in collaboration with her husband, singer/songwriter Diego Verdaguer In March of 1975, Amanda met Diego in Buenos Aires, and the two fell in love after she joined Verdaguer’s band as a backup singer. After going solo, Miguel and Verdaguer became a music-making team with Verdaguer writing and producing and Miguel performing. Though the two have each had separate solo careers, the couple comes together to write music, tour, and perform. Most popular in Mexico, Miguel and Verdaguer’s popularity has spread across the United States with their upbeat Pop Latino music.