Perhaps because vice-president Mike Pence once believed in it, Hollywood has given us not one but two major motion pictures this year about gay conversion therapy – a process by which therapists and/or religious leaders attempt to change the sexual orientation of homosexuals.  This process has long since been disproven, and is in fact considered dangerous by the American Psychiatric Association. 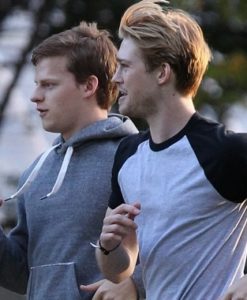 It seems mildly quaint to make a movie about gay conversion therapy in this day and age, but this summer brought us Desiree Akhavan’s “The Miseducation of Cameron Post,” and now actor Joel Edgerton tries his hand behind the camera for “Boy Erased.”  Given the almost simultaneous releases of these films, comparisons are inevitable – so, let’s get started.

While “The Miseducation of Cameron Post” was set in the 1990s, “Boy Erased” takes place in modern times.  Although an exact year is never mentioned in Edgerton’s adapted screenplay (from Garrard Conley’s book “Boy Erased”), smart phones are in common usage – giving this film a more urgent feel.

And while the conversion groups in both pictures are based in religion, the conversion therapists in Edgerton’s film are not “cartoon” villains, as they are in Akhavan’s.  And this, more than anything else, is what separates the two.  Aside from a winning performance from Chloe Grace Moritz, it’s difficult to take “Cameron Post” seriously when the villains seem like something out of a “Simpsons” episode – spouting scripture incessantly, as if simply being exposed to it will change anyone’s orientation.  In “Boy Erased,” the entire conversion process feels more realistic – laughable, given what we know about sexual orientation, but realistic.

As point of comparison, the villains in Jeff Nichols’ 2016 film “Loving” (which starred Edgerton) were laughable, in that no one today believes interracial marriage will be the death of society.  But they were presented as realistic depictions of the social norms of the 1960s.  The villains were treated with respect in “Loving,” just as they are in “Boy Erased.”

As far as the story is concerned, Garrard Conley is a real person, whose 2016 memoir “Boy Erased” tells of his fundamentalist upbringing, and his forced enrollment in a conversion therapy program that attempted to “undo” his homosexuality.  Edgerton’s film stars Lucas Hedges as Conley – a young actor who probably should have won the Supporting Actor Oscar for his dynamite performance in 2016’s “Manchester by the Sea.”  Since then, he’s shined in supporting roles in “Lady Bird,” “Three Billboards Outside Ebbing, Missouri,” and this year’s “Mid90s.”

But here, Hedges carries the film.  “Boy Erased” is his baby, and he absolutely nails the part.  In “Cameron Post,” the Chloe Grace Moritz character’s heart is never in the conversion therapy process.  Whereas Hedges’ Conley is at least willing to give it a try.  Conley comes from a fundamentalist Christian background, with a loving and supportive set of parents.  His father (who owns a car dealership) is pastor of a small Baptist church in rural Arkansas, and his bleach-blonde mother is a local hairdresser.

When Conley’s girlfriend wants to take their relationship to another level, he politely declines.  Soon thereafter, early in his college career, Conley is raped by a fellow student one night in his dorm room.  When his parents find out, Conley’s father consults a couple preacher friends, who recommend conversion therapy.

Ever the loyal son, Conley willingly attends the daily sessions, and befriends some of the other “students” (including a lesbian girl named Sarah).  Edgerton himself plays therapist Victor Sykes – the leader of the program, who seems dead-set on finding others to blame for each of his subjects’ homosexuality.  In other words, did any of his students have a gay uncle?  Or were they approached by a gay student?  Were their parents absent through much of their lives?  Any colonel of possibility is considered, and no stone is left unturned.

Conley plays along with the program until he’s asked to role play a discussion with his father in front of the group.  Conley freely admits he does not hate his father, and simply cannot bring himself to rail against his father as an excuse for his homosexuality.  Conley realizes his hatred is actually directed at Sykes himself, and he asks his mother to remove him from the program. 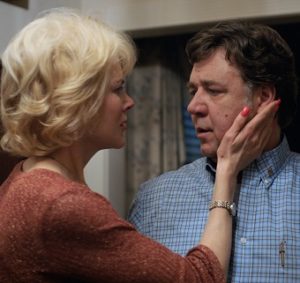 While Hedges’ performance is powerful – vulnerable, yet secure in his own being – those of his parents are strong as well.  As Conley’s mother, Nicole Kidman turns in her best performance in years.  She’s the supportive preacher’s wife – until her son is in trouble.  Then, watch out.  And Russell Crowe is equally as convincing as the domineering yet loving father.  This is a winning cast, and Edgerton gets the most out of each player.

“Boy Erased” does seem quaint, given its subject matter.  But again, this practice continues to this day – and this film adroitly exposes the ridiculousness of conversion therapy, while still giving the process the respect it deserves – much as “Loving” did with interracial marriage.  “Boy Erased” is smart and moving, and (unlike “The Miseducation of Cameron Post”) is one of this year’s best pictures.