I am blessed.  None of my children experimented with drugs.  I cannot imagine the horror a parent must experience upon learning his child has gone missing, knowing that drug abuse is responsible.  Steve Carell’s powerful performance as the father of an abuser crystallizes this fear in Belgian director Felix von Groeningen’s first English-language feature, “Beautiful Boy.”

Von Groeningen and co-screenwriter Luke Davies adapted the screenplay from David Sheff’s memoir, “Beautiful Boy: A Father’s Journey Through His Son’s Addiction.”  In the film, Carell plays Sheff, a San Francisco freelance writer raising his son Nic with his wife Karen.  Nic’s drug abuse lands him in a halfway house, where his progress is swift.  He lands an hourly job, and begins thinking about attending college the following year.

But as with alcoholism, progress is measured one day at a time, and relapses are not uncommon.  While biographical, “Beautiful Boy” takes us through perhaps one more regression than necessary in making this point.  It seems each victorious stretch of clean living is inevitably followed by another recurrence of Nic’s addiction, as we experience the terrible toll of hard drugs. 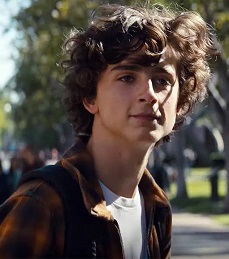 As Nic, young Timothee Chalamet turns in another winning performance.  We wince every time he lashes out at his supporting father.  Early on, we get the sense Nic genuinely wants to spend time with his dad – frequent short flashbacks indicate they were closer than most fathers and sons – but eventually his requests to meet with his father are nothing more than financial requests.  Sensing that such funds will be used to support his habit, David becomes increasingly reluctant to provide assistance – all the while researching the abomination of crystal meth abuse on his own.

Maura Tierney plays David’s wife (and Nic’s stepmom) Karen, and Amy Ryan is Nic’s biological mother Vicki, who lives in Los Angeles, and does what she can from afar.  While certainly not the crux relationship of the film, that of David and Vicki hits hard as well.  When Nic goes to live with his mother after college, we feel David’s inability to influence his son through the miles.  Furthermore, we see a little of the “blame game” divorced parents are likely to play when a child is in trouble – although the two always realistically refocus their efforts toward Nic and away from whatever stress may be in their past.  David and Vicki smartly keep their attention on their son.

Much as he did in last year’s “Last Flag Flying” and in 2015’s “The Big Short,” Steve Carell continues to cement his status as a serious actor, as opposed to the overtly silly roles that peppered his early career.  His turn as David Sheff in “Beautiful Boy” is perhaps his best yet.  His measured yet emotional performance allows us to experience a father’s anguish through a problem most of us are blessed to live without.

“Beautiful Boy” is not an easy film to watch.  It’s heartbreaking to experience, particularly from the father’s point of view.  Eventually, even the most protective parents feel helpless to combat the grip of hard drugs on a child.  This is a powerful and moving depiction of a horrific scourge.  I can’t say that “Beautiful Boy” is entertaining, but it’s certainly eye-opening.

I’m typically not one to support the overuse of flashbacks, and to von Groeningen’s credit, he uses no such long sequences.  But part of what makes “Beautiful Boy” tug at the heartstrings are the occasional quick flashbacks to Nic’s childhood, in which we see the bond he once had with his father.  We see David tucking Nic into bed at night, showing him how to surfboard, sending him on a plane to visit his mother, and so forth – often sandwiched between scenes of Nic and his girlfriend shooting up crystal meth into their ravaged arms.  It’s not a pretty picture, but it is very powerful.

Fortunately, “Beautiful Boy” doesn’t provide any easy answers, as there are none in this situation.  Clean living will be a daily struggle the remainder of Nic’s life.  We get the sense that while initially providing a barrier to their relationship, his addiction will draw him closer to his father as time progresses.  “Beautiful Boy” is to drug addiction what “The Days of Wine and Roses” was to alcoholism.  This film lays bare the horror of one of the least understood curses of our society.  Don’t expect to be entertained, in the truest sense of the word.  But prepare to have your eyes opened.