On Friday, November 2 at 7:30 p.m., 1964: The Tribute will bring their authentic rock Beatles rendition to The Egyptian Room at Old National Centre, located at 502 N New Jersey St. The show at Old National Centre will boast recreations of the greatest classic mega-hits by the Grammy Award-winning Beatles.

Tickets can be purchased at the Old National Centre Box Office, online at www.Ticketmaster.com, or charge-by-phone at 800-745-3000. 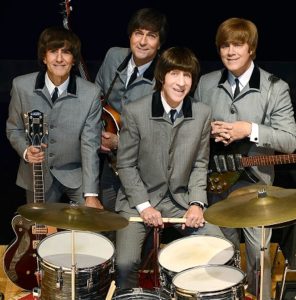 Critically acclaimed as the most authentic and endearing Beatles tribute in the world, 1964: The Tribute continues to delight audiences that span many generations. Formed in 1984, the current 1964: The Tribute band lineup of Mark Benson (as John Lennon), Mac Ruffing (as Paul McCartney), Tom Work (as George Harrison) and Bobby Potter (as Ringo Starr) takes audiences on a musical journey that explores the height of the rock era. With over 25 years of dedication to the craft, the band members of 1964: The Tribute have the experience and skill to deliver an authentic live Beatles concert. Period instruments, clothing, hairstyles, and onstage banter are all incorporated to make the experience a genuine one for the audience, showcasing the Beatles’ invasion of America.

1964: The Tribute headlines over 120 shows around the globe each year, having performed in noteworthy venues such as Red Rocks Amphitheatre, New York City’s Carnegie Hall, and Shea Stadium, among others. The band hasn’t limited their outreach either; they have also performed worldwide in England, Cayman Islands, Austria, Germany, and Mexico. Their appeal to those both young and old, along with their global outreach, brings audience members back to the glory rock days of the 1960s. The show has brought home its share of accolades as well, with Rolling Stone Magazine recognizing 1964: The Tribute as “the Best Beatles Tribute on Earth.”