Actor Jonah Hill has directed his first feature film, and while it’s no masterpiece, it’s basically a winner.  Perhaps its biggest problem is its name, “Mid90s.”  That places the action in a certain time period (and nothing more), although there’s really no reason this story couldn’t have taken place in present times. 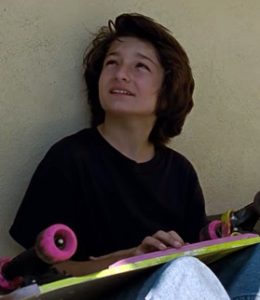 “Mid90s” is a coming-of-age story about a small 13-year-old boy named Stevie (Sunny Suljic, from last year’s “The Killing of a Sacred Deer”) who lives with his older brother Ian (Lucas Hedges, in another outstanding supporting role) and single mother Dabney (Katherine Waterston).  For some reason, Ian revels in regularly beating up little Stevie, even though it doesn’t appear as though he’s done anything particularly annoying.  Stevie is a loner, and longs for nothing more than to belong.

Enter Ruben (newcomer Gio Galicia), a slightly older boy who introduces Stevie to a tightly-knit group of skateboarders and all-around troublemakers, headed by Ray, an African-American skateboarding whiz, played by Na-kel Smith.  Ray would appear to be the only one who’s proverbial head is screwed on straight.  F***sh** (Olan Prenatt) is a loose cannon who drinks, cusses, and shows little to no respect for anyone in a position of authority.  And the quiet one, Fourth Grade (Ryder McLaughlin), is so named because, as nearly as anyone can tell, he’s no smarter than a fourth-grader.  Fourth Grade is a photography geek, and spends his time filming all the skateboarding and camaraderie.  (And in the days before cell phones, Fourth Grade uses an actual camcorder.)

The group teaches Stevie to skateboard, naturally, but more importantly, they become his surrogate family – much to the dismay of his mother.  Unfortunately, the group also teaches Stevie how to drink, smoke, get high, and get laid.  It’s not the coming-of-age story any parent would choose for his or her 13-year-old, but it’s our story nonetheless.  I suppose we’re to take from “Mid90s” the premise that any family, any sense of belonging, is greater than none.  But, as a parent, my limit is reached when the group mouths off to a school security guard, and later to Stevie’s mother.  Their utter disrespect for authority is appalling, and prevents me from rooting for Stevie as I believe Hill (who also wrote the original screenplay) wants me to.

I believe “Mid90s” works as a companion piece to this fall’s “Skate Kitchen,” a very similar story about a female skateboarding “family.”  The skateboarding footage is not as strong in “Mid90s,” but the depth of the story is greater.  Where “Skate Kitchen” is more of a paean to the sport and art of skateboarding, “Mid90s” takes a darker turn – first when Stevie is hurt while falling from a second-story roof onto a picnic table, then later when the boys drive drunk on a dark evening.

It is this intensity that makes “Mid90s” the superior film, although if I had to re-watch one, I believe I’d pick “Skate Kitchen.”  Crystal Moselle’s camera caresses the act of skateboarding in a way that Hill’s does not.  There are some nice skateboarding sequences, but nothing like that of Moselle’s film.  In fact, not only is it unnecessary for “Mid90s” to be set in the mid-1990s, it is neither necessary for the group to be united by skateboarding.  They could play basketball, or rob convenience stores, or any other bonding activity.  The point is that these boys bond.

And watching the relationship between Ray, the mentor figure, and the naïve but earnestly determined Stevie is perhaps the saving grace of “Mid90s.”  I would have liked to have seen more of their discussions and life lessons, but at less than 90 minutes, there’s not a lot of “padding” time available.

The final sequence is a collage of the footage compiled by Fourth Grade’s camera.  It serves as a review of the film we’ve just viewed, but it doesn’t necessarily add anything to our understanding of it.  Again, it’s the sense of family and sense of belonging that is being highlighted in this scene, and that’s the entire point of “Mid90s.”  Not a great film, but a strong effort for Jonah Hill’s first time behind the camera.