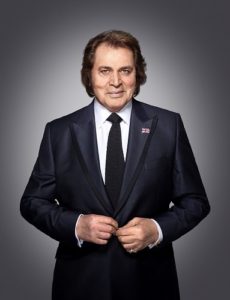 At the height of the psychedelic ’60s, this British crooner scored an unlikely No. 1 hit in 11 countries with his romantic ballad “Release Me,” which spent a record-setting 56 weeks on the charts. He has since sold over 140 million records with hits such as “After the Lovin’” and “This Moment in Time,” earning kudos that have included 64 gold and 35 platinum albums, four Grammy nominations, a Golden Globe, and stars on the Hollywood and Las Vegas Walks of Fame. His latest studio album is 2017’s The Man I Want to Be, which includes a reworking of Bruno Mars’ “Just the Way You Are.”

Now you can make your evening at the Palladium complete with their Pre-Performance Dinners. To complement select concerts this season, the culinary masterminds at A Cut Above Catering have developed music-themed dinners guaranteed to start your night off right.

For just $40 per person (tax included), you and your companions can enjoy a multicourse buffet meal in the Palladium’s elegant Robert Adam Room, with premium coffee and tea and a cash bar, starting 75 minutes prior to curtain time.