Eli and Charlie Sisters are hitmen brothers in the Old West during the time of the California Gold Rush.  Their surname is Sisters, and they are brothers – hence the title, “The Sisters Brothers.”  Clever?  Yes, but you should hear their banter. 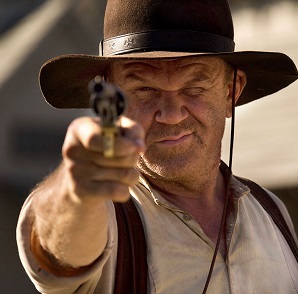 French director Jaques Audiard’s first English-language film is a Western – the most American of genres – and the Thomas Bidegain screenplay is adapted from Patrick deWitt’s 2011 novel of the same name.  The story line follows Eli and Charlie from Oregon to San Francisco, as they pursue a scientist named Hermann Warm.  The Sisters Brothers are under the employ of an unseen wealthy man known only as the Commodore.  At first, they don’t know why they are to kill Warm – his elimination is merely their job.  But we soon learn that Warm has developed a chemical strategy for gold panning that causes gold to illuminate when his formula is added to water.

As the Sisters Brothers, John C. Reilly and Joaquin Phoenix are stellar.  Phoenix’s Charlie is the oft-drunk hothead, and Reilly’s Eli is the more level-headed and sentimental.  Their repartee is akin to that of Chris Pine and Ben Foster in “Hell or High Water” – witty and droll, and only advancing the plot when necessary.  What a far cry from most screenplays, in which every utterance is in service to the story.  Audiard and Bidegain deserve at least Oscar consideration for their screenplay.

Phoenix is on a veritable tear this year with memorable appearances in “You Were Never Really Here” and (especially) Gus Van Sant’s “Don’t Worry, He Won’t Get Far on Foot.”  In fact, his performance in “The Sisters Brothers” is his most routine of the three.  It’s Reilly who has the juicy role here, and he delivers his best work in many years.  Eli Sisters is an admittedly odd character for a Western.  He has a heart of gold and feels the need to protect his brother – particularly when Charlie is drinking, a habit he apparently inherited from his father.  Eli is also the sad sack – the guy who always gets the slow horse, and can’t quite keep up with the rest of the group.

But Eli’s heart is not in the hitman routine.  He’d like to settle down and open a store with his brother – although Charlie prefers to remain in service to the Commodore.  This dichotomy makes for some of the wittiest conversation of the film.  And notice I say “wittier” rather than “funnier.”  “The Sisters Brothers” is not a comedy – it is simply a Western with some very good dialogue. 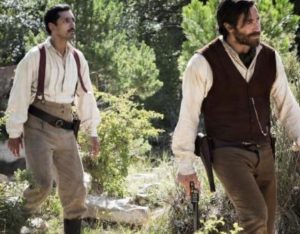 Traveling a few days ahead of the Sisters Brothers is another of the Commodore’s employs – a man named John Morris, played by Jake Gyllenhaal.  It is Morris’ job to find Warm and delay him until the hired guns arrive.  The extensive vocabulary Morris uses in his letters to the Sisters Brothers is also fodder for some of the film’s most clever dialogue.  Unfortunately, as Audiard cuts between the two stories – Morris/Warm and Sisters/Sisters – the pacing of the script suffers somewhat, only to recover for the third act.

Morris inadvertently develops a friendship with Warm (Riz Ahmed) which inevitably leads to a final act of double crosses and realignment of character allegiances.  It’s classic Western fodder, in which each man is out for himself, but is not above temporary friendships provided each party benefits in some way.

There aren’t many great Westerns anymore, and “The Sisters Brothers” isn’t in the same league as “3:10 to Yuma.”  But I’d place it a notch above Quentin Tarantino’s “The Hateful Eight.”  Audiard manages to make the genre refreshingly new at every turn while keeping it grounded in familiarity.   Again, the screenplay is the true star here, along with Reilly’s return to greatness.  And the emotional final scene is one that will stay with you for a long time.

In this season of Oscar contenders, “The Sisters Brothers” is likely to get lost in the shuffle.  And that’s a shame.  This is one that cries out to be seen and appreciated like a slow-cooking steak on a campfire.  It may not be perfect, but it’s a juicy and tasty treat.