Bat Out of Hell: The Musical

BAT OUT OF HELL THE MUSICAL 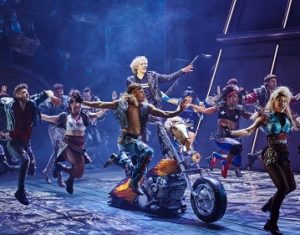 Jim Steinman’s Bat Out Of Hell – The Musical is a critically acclaimed, thrilling new musical based on one of the best-selling albums of all time. The tour stars Andrew Polec who thrilled London and Toronto critics with his powerhouse performance as Strat with The Daily Mirror calling him a “perfect rock and roll icon” and Time Out London saying he sings “with a ferocity worthy of Meat Loaf himself.” Jim Steinman’s Bat Out Of Hell – The Musical is a romantic adventure about rebellious youth and passion set against the backdrop of a city in ruin. The Lost, an eternally young street tribe, battles against a tyrant desperate to keep the city under his control. But when a forbidden love is exposed, who will survive the war for the future of the city?