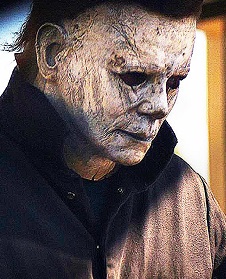 John Carpenter’s 1978 horror flick “Halloween” was one of the scariest films ever made.  Unfortunately, David Gordon Green’s new direct sequel, also titled “Halloween” isn’t.  And in this genre, what else is important?  Oh sure, there are the requisite lapses in continuity and extreme plot contrivances for the sake of providing additional frights, but in the end, we should be able to forgive a few screenplay errors in favor of sheer fright, right?  But with the “jump out of your seat” dial set low, the holes in Green’s and Danny McBride’s screenplay are magnified.

Taking place 40 years after the original (and with no mention made of any of the subpar sequels made in the 1980s and ‘90s), Laurie Strode (again played by Jamie Lee Curtis) is a wigged-out grandmother who has booby-trapped and barricaded her creepy, wooded home into a fortification of sorts – all in anticipation of the day mad-slasher Michael Myers (again played by Nick Castle) is either freed from or escapes from the nearby sanitarium which has been his home during the intervening years.  Some might view Laurie’s preparations as brilliant; others might consider her a nut job.  But the bottom line is that she suffers from an extreme case of never-reconciled PTSD.

Meantime, after 40 years of silence Myers is to be transported to a maximum security prison.  (I realize this seems backwards – typically the maximum security assignment precedes the mental hospital.)  A pair of British journalists attempts to interview both Myers and Laurie, meeting with resistance from both parties – although they do learn a lot about Myers from his longtime psychiatrist, Dr. Sartain, played by Turkish actor Haluk Bilginer.

Narratively, their inclusion serves only to bring us up to date with our two protagonists.  We are also introduced to Laurie’s daughter Karen (Judy Greer), her husband Ray (Toby Huss), and their high school daughter Allyson (Andi Matichak).  Karen views her mother as some sort of whack job who can’t simply let go of the past, but Allyson harbors a special relationship with her grandmother.

Allyson and her boyfriend leave for a Halloween costume party at their school the day the bus transporting Myers and others to the heavily fortified prison runs off the road in a rural area, allowing a bevy of inmates to escape – the only one of which authorities deem “violent” is, naturally, Myers.  And of all the sanitariums in the world, why Myers has been housed at one in the same town in which he committed his evil crimes is beyond me.  Again, we’re asked to swallow a lot of plot contrivances in Green’s “Halloween” – even for a horror film. 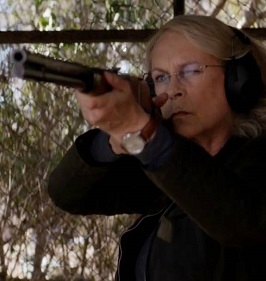 Myers makes quick work of a few victims, and eventually circles ever closer to Laurie’s secluded residence.  Why she remains his favorite victim is never explored, save for the fact that he was unable to kill her in 1978.  Will Patton plays the sheriff tasked with locating and capturing Myers – a thankless task which essentially serves only to show us that the authority figures are all in over their heads with Myers.

As in so many films of this genre, Myers is adept at killing innocent victims, but he himself seems to have the nine lives of the proverbial feline.  He survives being hit by a car, falling out of a second-story window, and even being shot.  A little of the “bad guy’s not really dead” is to expected in horror films, but Green’s “Halloween” is over the top in this department.

Character is something different

But perhaps my greatest complaint is that one solid, stable character turns out to be something different than originally presented.  Since I refuse to spoil it for you, I’ll use the recent example of Jordan Peele’s “Get Out” – a film with a great premise, which could have provided a great deal of social criticism of the way white people view African-Americans, only to devolve into a standard horror film.  In “Get Out,” the black protagonist’s white girlfriend turns out to be in on the plot to brainwash him – after seemingly loving him unconditionally for the first two-thirds of the film.  I can buy her parents and their friends viewing him negatively – but not her.  When we learn she’s part of the plan, “Get Out” falls apart for me.  The same plot twist occurs in “Halloween” – and for no apparent reason this time.

I had high expectations for this sequel to one of the greatest horror films of all time.  Unfortunately, my memories of Carpenter’s original will have to suffice for now.  On the flip side, Green’s “Halloween” would appear to have finally put to rest the possibility of any additional sequels.