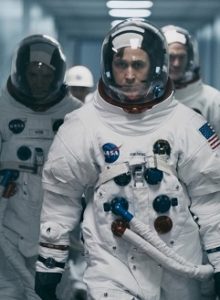 There’s a scene late in Damien Chazelle’s new Neil Armstrong biopic “First Man” in which Armstrong, who has now taken his first several steps on the moon, is silhouetted against the black background of the thin lunar atmosphere, as it contrasts with the shiny white lunar service reflecting the sun’s light. The camera pulls in tightly enough that we no longer see the lunar module – just Armstrong on the moon. And the camera stops moving. Finally.

This is the first and only image in “First Man” in which the camera is stable. Everything leading up to this point has been shot in hand-held style, giving us the impression of watching Armstrong’s home movies. Contrast this directorial choice with that of Stanley Kubrick, who utilized a stable-camera, wide-angle lens throughout the shooting of his sci-fi masterpiece “2001: A Space Odyssey.” This cinematographic stability gave Kubrick’s film more heft – more “weight,” if you will – than Chazelle’s. And perhaps that’s the point – that in watching “First Man,” we’re simply eavesdropping on the NASA career and home life of a single man, rather than watching anything of historical importance.

Of course, Armstrong’s feat is monumental and important; but we’re apparently not supposed to focus on the “course of history” angle, in favor of the human story. And why on earth not, I wondered as my eyes tried to make sense of the constantly-moving camera work?

I think the answer is contained in the understated performance of Ryan Gosling as the first man to walk on the surface of the moon. Armstrong was a notoriously serious and shy individual, who simply went about his task as an astronaut while shunning the proverbial spotlight. 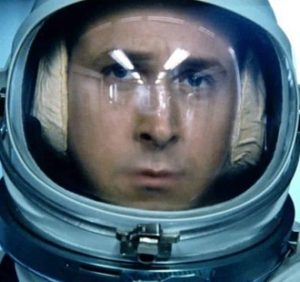 While Gosling was effective as the introspective jazz pianist in Chazelle’s last film, “La La Land,” he has a tendency to underact to a fault, often coming across as bored with his own subject matter. To wit, watch last year’s “Blade Runner 2049.” But here, he’s perfectly cast as the restrained Armstrong. He nails the midwestern cadence of Armstrong’s voice, and with the 1960s haircut, I had to keep reminding myself I was watching Gosling rather than archival footage of Armstrong himself.

Also strong are Claire Foy as Armstrong’s wife Janet, and Kyle Chandler as original Mercury Seven astronaut Deke Slayton, who was NASA’s point man for the Apollo program. But “First Man” is dependent on Gosling’s performance, and in this regard Chazelle’s film succeeds.

“First Man” also succeeds in placing the space program, often seen as so remote from everyday life that it exists outside the realm of affecting anything other than itself, into historical context. We see the Viet Nam protesters actively questioning why the federal government is investing so much into the Apollo program when domestic programs are bereft of adequate funding. Then, after the successful Apollo 11 crew safely returns to earth, Chazelle answers their concern by revisiting President Kennedy’s 1962 speech in which he promised to put a man on the moon by the end of the decade, “not because it is easy, but because it is hard.”

Doesn’t live up to predecessors

But by committing James R. Hanson’s 2005 biography “First Man: The Life of Neil A. Armstrong” to film, Chazelle and screenwriter Josh Singer have the unfortunate task of living up to some of the greatest motion pictures ever made – not to mention Chazelle’s last two pictures, “Whiplash” and “La La Land.” Stanley Kubrick’s 1968 classic “2001: A Space Odyssey” will likely always be the standard against which any science fiction film, or film about space exploration, is measured. If we assume Kubrick’s is the greatest of all astronaut pictures, Philip Kaufman’s “The Right Stuff” and Ron Howard’s “Apollo 13” fill the second tier. And I’m inclined to place Alfonso Cuaron’s “Gravity” in the same league as Kaufman’s and Howard’s work.

That leaves “First Man” to rank another notch below these monumental achievements in filmmaking. And again, Chazelle and cinematographer Linus Sandgren have opted to depict a “home movie” feel to the Armstrong story, which necessarily lessens the effect of his accomplishment. I believe this contributes to their film’s ranking below some of these others. Granted, we’re talking high company here. But “First Man” simply never rises above the level of a “B” or “B+” term paper.

I also fault Chazelle and Singer for focusing on the failures of both Armstrong and NASA during the years leading up to the successful moon landing. Obviously, no film about the Apollo program would be complete without a chapter about the ill-fated Apollo 1 mission which claimed the lives of Gus Grissom, Roger Chaffee, and Ed White. But “First Man” at times plays out like a laundry list of missteps, each placing increasingly greater importance on the success of Armstrong’s mission. I’m certain each of these setbacks served as learning experiences for the folks at NASA, but from a stylistic perspective, I would have preferred to see a triumph or two along the way to balance the overall presentation.

On the whole, “First Man” is a good film. But given the restraints described above, it frankly never rises to the level of “great.” Again, Armstrong was one of the least effusive heroes in American history, but his place in American history is solid and important. “First Man” probably should have done a better job of conveying his consequence. That Chazelle has intentionally decided not to works against the achievement of his film.