It’s difficult to make a compelling film about ghost writing.  Roman Polanski’s 2010 “Ghost Writer” was indeed a story about a ghost writer, but it was couched in the structure of a murder mystery.  Bjorn Runge’s recent “The Wife” also dabbled in the practice of ghost writing, but it was more a character-driven drama in which a woman questions her life choices. 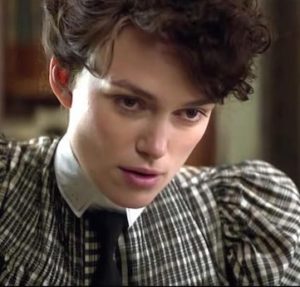 But Wash Westmoreland’s new “Colette” is truly a story about a ghost writer.  And therein lay its greatest barrier to success.  Writing, in and of itself, does not make for compelling theatre.  It’s difficult to embrace the solitary writer, sitting alone at a candle-lit desk writing ad infinitum into the wee hours, the way we might embrace a prize fighter at the sound of the first bell or a basketball player at the beginning of overtime.  No, writing makes for boring subject matter for the stage and screen.  But that hasn’t stopped Hollywood from churning out all manner of stories about writers.

In “Colette,” Keira Knightley plays renowned French novelist Gabrielle Colette, who wrote under the pseudonym Colette – primarily known for writing the 1944 novella “Gigi,” which was adapted into the famous Lerner and Lowe musical.  But Westmoreland’s story takes place decades earlier, when Colette’s career was in its infancy.  Raised in a rural French village, she was brought to Paris in the 1890s by her husband Henry Gauthier-Villars, a well-known newspaper journalist known as Willy, who would have given his right arm to be a novelist.  Problem was he had no talent for long-form writing.  But Colette did.

Facing repossession of some of their furniture, Colette acquiesces to Henry’s request that she commit her life story to pen and paper.  Although not initially impressed with her work, Willy submits “Claudine” to a publisher friend, and success follows almost overnight.  Unable to rest on his (actually her) laurels, Willy demands subsequent tomes of Claudine’s life – even locking Colette in her room until she produces additional material.

Willy soon becomes the toast of turn-of-the-century Paris, with Colette by his side as his loving and admiring wife.  As Willy, British actor Dominic West is at the top of his game playing the overpowering and boorish writer and celebrity du jour.  This is the type of role that the late Philip Seymour Hoffman would have nailed.  He’s always anxious to show off his beautiful wife in public, but mistreats her in the comfort of their own home.  As you might guess, Willy is also a womanizer – even going so far as to suggest Colette have her own extramarital affairs. 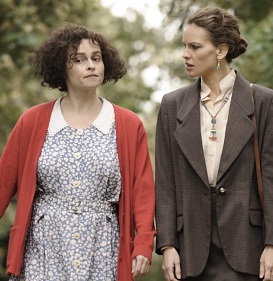 When Willy and Colette each woo the hand of visiting New Orleans socialite Georgie Raoul-Duvall (Eleanor Tomlinson), our interest in “Colette” begins to wane.  By the time Colette takes up her first meaningful relationship – with noted lesbian artist Mathilde de Morny, played by Denise Gough – the entire exercise of Westmoreland’s film has become burdensome.  Perhaps Westmoreland (and co-screenwriters Rebecca Lenkiewicz and the late Richard Glatzer) intended to portray Colette as a woman at least a century ahead of her time.  Perhaps the goal was to show that women can overcome oppressive restraints placed on them by men.  Either goal is worthy; but by themselves neither goal inspires interesting drama.

I would have preferred “Colette” skim over her early relationships, and instead reconvene at a later time in her life – after her divorce from Willy, perhaps during the aftermath of the publishing of “Gigi.”  I believe such a structure would have given the story a greater arc, and might have caused us to appreciate one of France’s greatest modern literary talents.  Instead, we are left with a middling story of a mistreated ghost writer who rises above a difficult situation.  But nothing more.  “Colette” refuses to show us the heights to which she rose later in her career.

And that’s too bad.  Knightley and West have never been better, but their acting chops are somewhat wasted in a tedious second act that never lives up to the potential of the first hour.  Westmoreland and Glatzer are the team behind 2014’s “Still Alice,” the Alzheimer’s story that finally won Julianne Moore an Oscar.  They should have done better with “Colette.”  I look forward to Westmoreland’s next film, believing and hoping that “Colette” is merely a bump in the road to a promising career.