In 2015, Ethan Hawke played jazz trumpeter Chet Baker in the biopic “Born to be Blue.”  It was a good film and Hawke turned in a great performance.  He obviously knows a thing or two about spotlighting relatively unknown musicians, and now has taken his turn behind the camera for “Blaze,” a biographical drama about the short career of country music’s Blaze Foley.  As I did with “Born to be Blue” (and countless others of the genre), I wondered why I should care about a musician about whom I know very little.  Unfortunately, having watched “Blaze,” I still wonder.

Who was Blaze Foley? 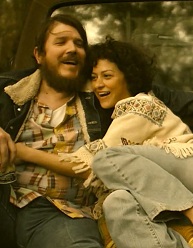 Apparently, Blaze Foley was a charismatic drunk whose songs were little observations on life, but all sounded the same.  He had a core group of bandmates and friends who supported him and traveled with him.  Foley was killed in 1989 at the age of 39, never having made it to the big time.  His greatest claim to fame was that Willie Nelson recorded one of his songs.  Given these facts, I still wonder why his short life is deemed important enough to warrant a major motion picture.  Surely there are countless other almost-famous musicians whose lives might have made for mildly interesting stories.  Why Blaze Foley?

Couched in the structure of a long interview on a country music radio station, Foley’s friends Townes Van Zandt (Charlie Sexton) and Zee (Josh Hamilton from “Eighth Grade”) try to explain to the host (an unseen Ethan Hawke) why he needs to know who Blaze Foley was.  Foley’s life story is then related in flashbacks as his friends divulge the details – from his relationship with a Jewish girl named Sybil Rosen (Alia Shawkat), to his domestic life in an oversized treehouse, to his endless parade through a myriad of seedy bars and late-night honkytonks.

It is this feature that is most aggravating about “Blaze.”  How many times must we witness Foley start a fight with an audience member or ruffle the feathers of a bar owner before we’re ready to get up and walk out of the theatre?  A little of the “loveable drunk” routine goes a long way.  Having watched “Blaze,” I have no doubt that Foley had a good heart.  But he also had a mean streak that was enhanced by his drinking.  Unlike Joaquin Phoenix’s character in Gus Van Sant’s recent “Don’t Worry, He Won’t Get Far on Foot,” Foley shows no real desire to change his ways.  He would appear to be perfectly comfortable drinking his way through nightly performances to a dozen equally drunk patrons who could seemingly care less about his music. 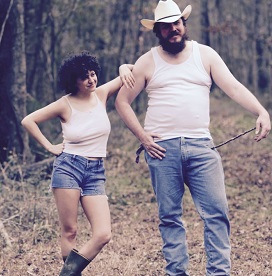 As Foley, Ben Dickey gives a larger-than-life performance in which the twinkle in his eye and the song in his heart are responsible for whatever success he had during his short life.  Shawkat turns in the film’s best performance as Sybil Rosen, Foley’s muse and lover.  It is her biography, “Living in the Woods in a Tree: Remembering Blaze” upon which Hawke’s film is based.  Hawke and Rosen adapted the screenplay, and Rosen herself plays her own mother in the film.  In one of the few touching scenes, Rosen’s parents try to get Blaze to convert to Judaism as a prerequisite for marrying their daughter.  Ever consumed by his music and his devotion to their daughter, Foley agrees to their terms.

The other touching scene takes place in a nursing home when Blaze and Sybil visit his once-abusive father, played by Kris Kristofferson.  Alynda Lee Segarra plays Blaze’s sister Marsha, and they reminisce about their younger years in which they performed as the Singing Fuller Family, a semi-popular gospel group.

Songs all sound the same

But a couple nice scenes do not make for an interesting time at the local Cineplex, and while certainly well-intentioned, “Blaze” eventually devolves into a string of late night barroom brawls, loosely strung together by poorly conceived country songs that attempt to paint the picture of a misunderstood buried talent, but that all sound the same.  Remember Barbra Streisand’s overblown “Yentl?”  Every time she’d break into song, I’d think, “Oh no, not another song.”  Same deal here.  And as in “Yentl,” all the songs sound exactly the same.

Why should we care?

Ironically, the best song in the entire picture occurs when Blaze and Sybil break into Roger Miller’s “Robin Hood and Little John” song from Disney’s animated “Robin Hood.”  Granted, that’s not high art.  That it is the best song in “Blaze” says volumes about Foley’s music.  And I still wonder why I should care.