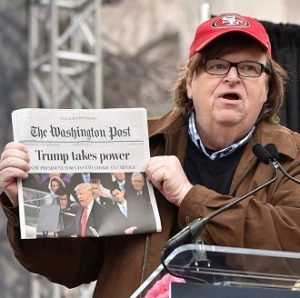 By now, you’re undoubtedly familiar with the fact that Michael Moore’s new documentary “Fahrenheit 11/9” has been released, and it would appear to be an effort to skewer anything Donald Trump.  And you would be correct… up to a point.  Moore’s goal here isn’t so much to tell us what an awful president and person Trump is.  Heck, we’re fully aware of Moore’s views even before the opening credits.  No, Moore’s intention here is to ponder how we arrived at “Destination: Trump” in the first place.  In other words, what forces collided and what stars aligned in such a fashion that one of the least well-liked celebrities who has ever walked the face of the earth could become President of the United States? 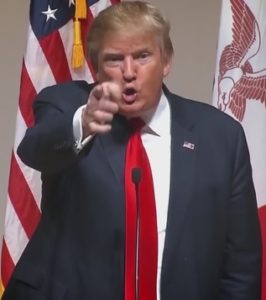 The film’s title is an obvious paean to his 2004 classic “Fahrenheit 9/11” – which is a shame, because the two films share very little.  The ’04 offering was a blatant attempt to pull votes away from President George W. Bush, at a time when his poll numbers were soaring.  The nation had rallied around the president following the 9/11 terrorist attacks in 2001, and generally supported his subsequent invasion of Iraq in ’03.  But this time, President Trump makes for too easy a target.  Some polls show he is the least popular president ever; others since Richard Nixon.  And Moore provides a meaningful graphic showing how a strong majority of Americans disagree with the president on darn near every issue of the day.  To wit, most Americans support women’s equality (including reproductive rights), LGBT rights, immigrants’ rights, universal healthcare, free public higher education, and so forth.  So his overarching question is strong:  Why is Donald Trump our president?

How did we get here?

From that perspective, Moore succeeds – albeit in a scattershot style which is fast becoming his modus operandi.  The last time Moore dealt with just one issue in a film was his examination of American healthcare (or lack thereof) in “Sicko” – and that was clear back in 2007.  This time he begins with Trump ascension to the White House, and places the blame squarely in at least a dozen theories – a poor Democratic candidate, a superdelegate system which prevented the galvanizing Bernie Sanders from attaining the Democratic nomination, passive interest among many American citizens, and a fawning press more interested in ratings that in journalistic integrity.  And he doesn’t even mention gerrymandering – the process by which U.S. Congressmen choose their voters rather than vice versa.

But “Fahrenheit 11/9” quickly veers into three divergent directions – related only by the thread that corporate money, unchecked capitalism, and voter suppression (read: Republicans) are responsible for all of them.  One is the lead poisoning water crisis in Moore’s hometown of Flint, Michigan; another is the Parkland High School student uprising in Florida and Washington, D.C., following the tragic shooting of 17 of their classmates; and the third is the West Virginia teachers strike which galvanized similar walkouts in other low-pay states.

A glimmer of hope 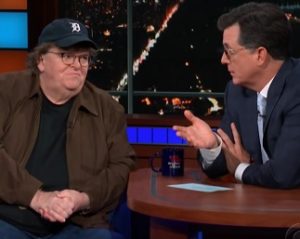 But this time Moore does something his films often omit.  He offers a glimmer of hope.  “Fahrenheit 11/9” follows the Congressional candidacies of several first-time aspirants across the nation who have decided to run for office because they (and many of their constituents) are simply fed up with a system that has produced a Trump presidency.  These candidates include multiple women and people of color.  But his most impressive find is a West Virginia redneck and former coal miner whose conversational speech is so heartfelt he may just make it to the Senate one of these days.

Moore performs his usual bevy of “theatre of the absurd” stunts, such as spraying the property of Michigan’s governor’s mansion with filthy Flint water, but he’s at his best when he couples the audio of a Trump speech with the video of one by Adolf Hitler.  The footage is so perfectly matched that even Hitler’s hand gestures seem timed to coincide with the emphasis of Trump’s words.  But following our initial laughter, we realize that Moore’s warning is not to be taken lightly.  Remember, Germany had Constitutional checks and balances too before Hitler superseded them.

Fortunately, Moore circles back to the powerful images of the Florida student protesters and the bare-bones Congressional candidacies of the first-timers to provide a lasting image of hope before the curtain rises.  But “Fahrenheit 11/9” may very well be Moore’s heaviest, most depressing offering yet, in that his resonating message is that our entire political system must be torn down before it can be rebuilt.  That’s a tough pill to swallow, but the end result of “Fahrenheit 11/9” is a better film than I had expected, given the easy target of the subject matter.