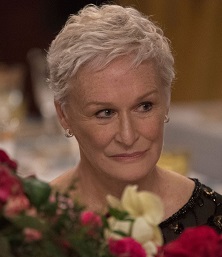 Glenn Close is a national treasure.  Unfortunately, many of us know her for being nominated for six Oscars and not winning a single one.  So far.  The film that may just change her luck is Swedish director Bjorn Runge’s new drama “The Wife,” in which Close stars as the loving and supportive wife of a famous American novelist and literature professor, played by the great British actor Jonathan Pryce.  Jane Anderson’s screenplay (adapted from Meg Wolitzer’s novel of the same name) begins as Dr. Joe Castleman (Pryce) has just received that early-morning call from Sweden informing him that he has been selected to receive the 1992 Nobel Prize for Literature.

After we meet the Castleman’s adult children – the very pregnant Susannah, played by Alix Wilton Regan, and the aspiring writer David, played by Max Irons, son of Jeremy – the family (less Susannah) boards a Concorde for Stockholm.  It is in these “middle” scenes where an inferior film would falter.  After all, how many times must we see Joan (Close) adjust her husband’s tie or remind him to take his pills until we understand that their marriage is one of very defined roles and expectations?  She is not only his biggest fan, but she is his personal secretary in every phase of his life.  And by all outward appearances, she is the perfect spouse for the endless hobnobbing that comes with receiving a major award – always smiling by her husband’s side; able to speak intelligently about any topic, although never more intelligently than her husband.  He is the star; she the support.  And Joe is always eager to call her out for the love and endless support she’s provided through their long marriage.

But “The Wife” actually succeeds most during its long second act.  This is where we first see young David’s inner conflict as he balances his fledgling writing career with the elusive support of his father – the one “critic” he aims to please.  And we begin to learn of a possible below-the-surface irritation cycling through Joan’s veins.  She’s a former grad student of Joe’s who once had a promising writing career herself.  Is she jealous of her own husband?  Is she upset she shelved her career to support his?  Is she upset with his occasional dalliances that have peppered their marriage? 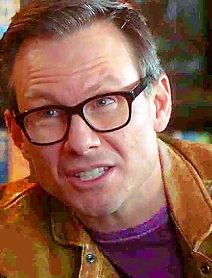 And we’re also introduced to Nathaniel, a biographer intent on garnering Joe’s endorsement of a forthcoming account of his own life.  As Nathaniel, Christian Slater sinks his teeth into his meatiest role in years.  Forced to walk a thin line between heaping undue praise on his subject and coming off as a tabloid hack, Slater plays his cards just right.  His Nathaniel is a genuinely nice guy, but he’s followed the Castleman family to Stockholm for the sole purpose of digging up potential dirt.  While Joe politely brushes him off, Joan understands that if a biography is to be published, it’s far better to cooperate with the writer than not.  The afternoon pub scene between Nathaniel and Joan is a thing of beauty, in that it’s well-written, and because Close and Slater are each at the top of their games.

Excellent use of flashbacks

It is also during this middle portion of the film that we’re treated to three substantial flashback scenes involving Joan’s college years, during which she and her composition professor (Joe) began an affair which eventually led to their marriage.  Normally I’m not a fan of the use of flashbacks to tell stories which could be told better by the present-day characters.  But here, the flashback scenes are absolutely necessary to provide the proper background.  And Runge times them perfectly.  Just as we begin to tire of the increasing present-day tension (between Joe and Joan, and between David and both his parents), along comes a flashback to provide exactly the background necessary to understand the stress we’re witnessing amongst the 1992 characters.  It’s the best use of flashbacks I’ve seen in a motion picture in some years. 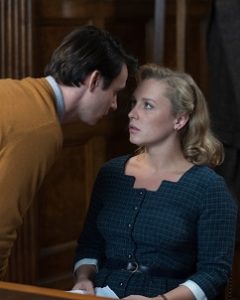 And unlike so many films – in which we are asked to accept younger actors who don’t necessarily resemble their current-day versions – these two youthful performers are pitch-perfect.  Tall, lanky Harry Lloyd exhibits all the bodily twitches and insecurity we see in Pryce’s senior citizen version of the Joe Castleman character.  And not only does Annie Starke possess the aura of a young Glenn Close, she actually is Close’s daughter.  The two are so strong there were moments I could have sworn I were watching Pryce and Close in the 1950s.

One of Close’s best

By the time the Nobel prizes are awarded and our attention shifts to the ensuing banquet, we know enough about the Castlemans to be prepared for a potential showdown – an explosion of pent-up emotion is ready to pop.  But Runge doesn’t go for the “big scene” (a la that of Whoopi Goldberg in “The Color Purple”).  He instead opts for a gentler yet very firm airing of Joan’s grievances, during which Close cements her position as one of our greatest living actresses.  When she is long gone, her performance in “The Wife” will be mentioned alongside her work in “Dangerous Liaisons,” “Fatal Attraction,” “The Big Chill,” and dare I add two of my personal favorites – “The World According to Garp,” and Robert Altman’s “Cookie’s Fortune.”  And Pryce is no slouch either.  Here, he holds his own with one of our most considerable talents.  He too should be nominated for an Oscar.

A couple years ago, Tom Courtenay and Charlotte Rampling starred in a drama called “45 Years,” in which they played a couple approaching their 45th wedding anniversary.  It was to be a major celebration with all their friends, family, and co-workers from over the years.  But there was a tension brewing beneath the surface – one which boiled over with a Rampling monologue at the party that garnered her an Oscar nomination.  I wrote that I enjoyed “45 Years” immensely because I simply enjoyed watching these two veteran stage and screen actors display their craft.  Courtenay and Rampling were brilliant, and I wish more people would have seen their work.

One of the year’s best

I feel the same way about “The Wife.”  Even if Anderson’s screenplay weren’t so tight, and even Runge’s direction weren’t so flawless, I would have still enjoyed this film for the mere delight of watching Close and Pryce act!  The fact that “The Wife” is also one of the best pictures of the year (superior to “45 Years”) is simply icing on the cake.  Do yourself a favor and seek out “The Wife.”  It is one of the two or three best films I’ve seen so far this year.