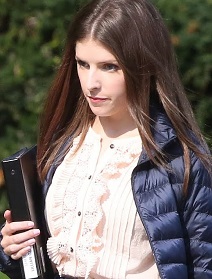 I love the first third of Paul Feig’s “A Simple Favor.”  We meet Stephanie, the seemingly perfect single mother of an elementary school son named Miles.  Stephanie is so wont to volunteer for every available task, Miles’ teacher must restrain her so that other parents are able to sign up too.  In and amongst her baking cookies for every possible function, Stephanie finds the time to vlog – daily, mind you – to share favorite recipes, helpful hints, and her stories of suburban motherhood.  Other parents chide Stephanie behind her back, but they are secretly jealous.  How could someone have this much energy, accomplish so much in service of her son, and still be happy about life?

Into Stephanie’s world comes Emily, her arch-opposite in every possible way.  Emily has a high-powered human resources job with a clothing designer in New York; she’s married to a once-promising novelist; she drinks too much; and, oh yes, her son Nicky is a classmate of Miles’.  While Stephanie is practically a fixture in the boys’ classroom, Emily is absent – from her son’s life, and from participation in life in general.  There’s something mysterious about Emily and, following her baffling disappearance, Stephanie is bound and determined to find out what it is that makes her tick.

Emily leaves Nicky with Stephanie and Miles for an after-school playdate.  Days go by, and no sign of Emily.  Her office says she had to fly to Miami.  But why no phone call – to her own son, let alone to Stephanie?  Successfully concluding that the police won’t be much help, Stephanie traces Emily’s rental car to a Bible camp in rural Michigan, and then takes off on an adult sleuthing expedition that would make Nancy Drew envious. 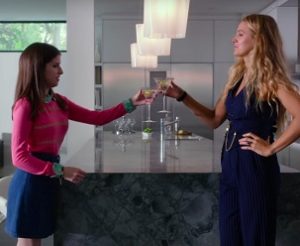 As Stephanie, Anna Kendrick is perfectly cast.  Bright, cheery, and mildly naïve, she plays the role as a sharper, more worldly-wise version of Goldie Hawn’s stock character.  Blake Lively is Emily, and Henry Golding (“Crazy Rich Asians”) is her husband Sean – by all outward appearances, a well-meaning and loving husband who is truly concerned about Emily’s disappearance.  Until she turns up dead.  Then the fervor with which he pursues the widowed Stephanie takes Jessica Sharzer’s adapted screenplay out of the realm of the believable and into the territory of plot twists for the sake of plot twists.

And thus my interest in “A Simple Favor” vanished.  The middle portion of the film is simply too dependent on happenstance, featuring well-defined characters acting so far outside the possibilities established at the outset as to be unbelievable.  And the closing sequence features enough double-crosses and hidden police wiretaps to cause viewer whiplash.  This is a case of a film which should have stayed true to its initial set-up.

Why not simply continue with the oddball friendship of an impeccable suburban mom with a confounding power-hungry city girl?  I know – “A Simple Favor” is based on Darcey Bell’s 2017 novel of the same name, so it must be true to its source material.  And there’s the rub.  There is no reason for this story to be made into a major motion picture.  A good writer could have produced an original screenplay with similar characters and taken the story in a completely (and perhaps more palatable) direction.

Fails as comedy and drama

Instead we’re treated to Kendrick’s humorous, somewhat awkward Goldie Hawn-esque mom playing against Blake Lively’s character, who (as the film progresses) channels Linda Fiorentino’s dangerously criminal Wendy Kroy in “The Last Seduction.”  And Henry Golding’s Sean might be the doting and confused husband, or he might be somehow caught up in Emily’s web of deceit and destruction.  This is an odd mix of comedy and drama, which fails on both counts.  It’s too lighthearted to be taken seriously as a crime caper.  Yet it’s too heavy to work as a comedy.

And that’s a damn shame.  Feig’s direction immediately impressed me with his choice to use a French-language version of “Music to Watch Girls By” over the opening credits.  That decision, in and of itself, set the stage for what should have been a delightfully unpredictable Anna Kendrick comedy.  Unpredictable turns out to be the operative word, as “A Simple Favor” veers into a darker world than that which is initially established.

Anna Kendrick – so perfectly cast in the “Twilight” and “Pitch Perfect” sagas – deserves to star in a truly great, Oscar-worthy role.  I hope someday that will happen.  Unfortunately, “A Simple Favor” is not that vehicle.