At the 2015 Sundance Film Festival, the Documentary Grand Jury Prize was won by “The Wolfpack,” the story of a New York family whose seven children were homeschooled.  Director Crystal Moselle has now released her first narrative film, “Skate Kitchen,” but it may as well be another documentary.  Shot on the streets of New York City, “Skate Kitchen” follows a group of late-teens/early-twentysomething skateboarder girls who carve out their own nitch in a city that doesn’t seem to care about them (or much of anything, for that matter).

New York City as a character 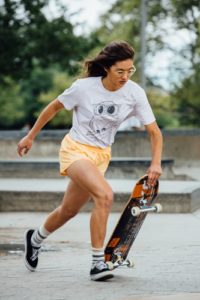 New York is portrayed as a cold and unwelcoming destination where people go about their daily lives in apparent oblivion to those around them.  It’s the city that drives the nation, nee the world, but its proverbial door would appear to be closed to outsiders.  Enter Camille (newcomer Rachelle Vinberg), a pretty but somewhat invisible teen from Long Island who clashes with her single mother (Elizabeth Rodriguez) over her constant skateboarding.  It’s the only aspect of her life that would appear to bring Camille any joy, yet her mother deems it too dangerous.

In a fit of defiance, Camille seeks out a skate park in the city – the big, unwelcoming city – and finds a group of female skateboarders known as the Skate Kitchen.  Watching these girls skate is the joy of Moselle’s film, as her camera fixates on the skateboards and follows them around town.  The cinematography reminds me of Martin Scorsese’s “The Color of Money,” in which the movement of the balls around the pool table was depicted as a thing of beauty – while the identities of those who put the balls in motion was often disguised or diminished.  Same with “Skate Kitchen.”  It’s not as important which girl is performing which stunt.  Instead, it’s the stunts themselves that are presented as something to marvel.

The bond of belonging 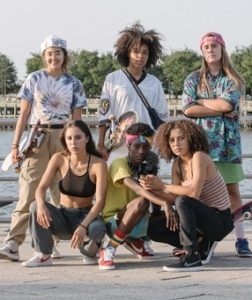 We meet the eclectic and electrifying group of girls.  There’s the welcoming and sympathetic Janay (Dede Lovelace), the defiant and mouthy pseudo group-leader Kurt (Nina Moran), and so forth.  We also meet a few of the boys in the neighborhood’s male skateboarding contingency, but they are presented more as enemies who look down their collective noses at the girls who desire to master “their activity.”  The girls hail from various backgrounds and family situations, but they develop a common bond through their hobby, and use that bond to essentially grow up.  During their downtime from skateboarding, the girls get high and discuss everything from sexual preferences to first periods.

Some semblance of various plotlines eventually develops.  Camille takes a job at a corner market in the city, where she works with Devon (Jaden Smith), a boy from the competing male skateboarders.  Camille and Devon develop a plutonic relationship, made difficult by the fact that he is Janay’s former boyfriend.  And Janay is kind enough to allow Camille to live with her when things sour with Camille and her overpowering but well-intentioned mother.  The Devon angle seems tacked on to give Moselle’s screenplay a plot.  It really isn’t necessary, although there isn’t enough material here for a feature-length film without it.

And there’s the rub.  On the one hand, “Skate Kitchen” suffers from the same dilemma as Clint Eastwood’s recent “The 15:17 to Paris,” in that the threadbare screenplay requires padding to flesh out a 90-minute run time.  But on the other hand, outside of Camille (and to some extent Janay), we don’t really learn the backstories of the other girls in the Skate Kitchen group.  I suppose I would have preferred getting to know the girls a little better, although I understand Moselle was trying not to make another documentary – and these young actresses actually are skateboarders in a New York collective called the Skate Kitchen.

So for the third time this year, we have a narrative motion picture utilizing the actual subjects as the actors themselves.  Eastwood’s “15:17” was a terrible bore; Chloe Zhao’s “The Rider” was a masterful look at the life of rodeo cowboys; and “Skate Kitchen” fits somewhere in between.  The bottom line is that it doesn’t really matter if actors play themselves so much as does the quality of the screenplay.  In this case, Moselle (along with Aslihan Unaldi and Jen Silverman) has crafted an in-depth look at a hobby which serves as the glue to bond a small group of daredevil girls finding their way through their immediate post-puberty years.  I would have preferred a more in-depth examination of the characters themselves, but I am impressed with the depiction of skateboarding as a thing of beauty rather than a mere annoyance of city life.