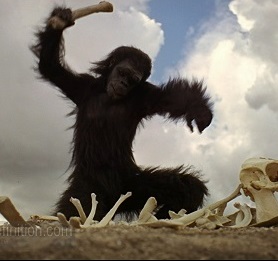 Stanley Kubrick’s “2001: A Space Odyssey” is showing September 7th thru 13th at the IMAX Theater at the Indiana State Museum in White River Park.  This is the first time in the IMAX format for the motion picture masterpiece, and what a perfect marriage of film to format.  If there’s one film in motion picture history that begs to be seen in IMAX, it’s this one.

One of greatest films ever made

What more can possibly be written about “2001: A Space Odyssey” that hasn’t already been written.  While Kubrick’s “A Clockwork Orange” is my favorite film of all time, “2001” certainly appears on my list of the half-dozen best pictures ever made.  In fact, I don’t know a critic who doesn’t have “2001” on his list of the best ever.  It’s certainly considered to be the best science fiction film ever – yet it feels nothing like any other sci-fi flick.  Its style has never been duplicated by any other filmmaker.

Originally produced using the long-defunct Super Panavision 70 technique, causing the films dimensions to be wider than standard fare, “2001” has always had a problem adapting to VHS and DVD formats because the letterboxing required to fit the entire canvas onto a television screen is so severe.  Now we have the opportunity to watch this masterpiece on an IMAX screen – a technology which didn’t even exist when it was released in 1968.

If you’ve seen “2001,” you’ll certainly see it as never before.  If you’re new to “2001,” be prepared to be awed.  But not without the caveat that this film is so unique a true plot won’t develop until about an hour has passed.  This plot, such as it is, centers around a manned mission to Jupiter, guided by an omniscient and omnipresent computer, the HAL-9000, which the astronauts call “Hal.”  Programmed on earth to monitor each of the spacecraft’s functions and communicate with the astronauts in a startlingly human voice, Hal possesses the capability of altering various operations, as necessary, to keep the ship on mission and to keep its inhabitants safe.  Unfortunately, this seemingly foolproof plan comes crashing down in an unforgettable fashion.

Prior to the Jupiter mission is a shorter sequence involving a lunar voyage (and remember, “2001” was released a year before Neil Armstrong set foot on the moon), which ends quizzically; it won’t make sense until late in the film.  And before that, we are treated to a segment examining prehistoric man’s discovery and development of weaponry.

During each portion of the film, a strange, lifeless, black monolith appears for no apparent reason.  Screenwriter and Kubrick collaborator Arthur C. Clarke describes it as the remnants of a more evolved civilization which has previously visited earth, its moon, and Jupiter, and has long since evolved from organic form, to human form, and now to a state of pure energy.  I’ve read other interpretations, including an allegorical depiction of Friedrich Nietzsche’s “Thus Spoke Zarathustra,” which contended that mankind would eventually be supermen whose powers we cannot understand in our present existence.

Ironically, Richard Strauss’ 1896 tone poem “Also Sprach Zarathustra” (a musical setting of the Nietzsche work) is played every time we see the monolith reappear.  As is typical of a Kubrick film, classical music plays a large role – also including “The Beautiful Blue Danube” by Johann Strauss (no relation to Richard). 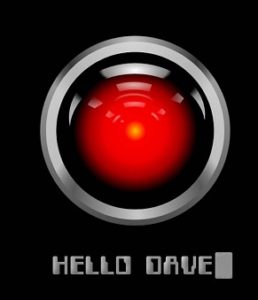 One of the most unique aspects of “2001” is that, unlike almost any other science fiction film, it accentuates the quietness and loneliness of space travel.  No one speaks a word in this film through about the first 40 minutes.  The final half-hour is also without dialogue.  When the astronauts, and particularly Hal, communicate, their voices are eerily slow and measured.  Even the final sequence, either showing the surviving astronaut’s descent through Jupiter’s atmosphere or his thrust into deep space, is full of orchestral music but without any speaking or screaming.  During this mindblowing progression, Kubrick uses slit-scan photography to capture the high speed of his travel.  The bright colors stand in sharp contrast to Kubrick’s earlier black and white pictures.  Kubrick himself described this section as the pod’s journey through “a vortex of colored light; Bowman (the surviving astronaut) races across vast distances of space, viewing bizarre cosmological phenomena and strange landscapes of unusual colors.”

Remember that “2001” was released in 1968.  Many young people took LSD at the beginning, then approached the screen during this climactic sequence to “trip out.”  The soft voices of the astronauts and computer also lent well to the acid-trip theme.

Some have suggested “2001” is antithetical to the Judeo-Christian tradition, as its ending seems to offer no hope for an afterlife.  As a practicing Christian, I’ve always thought of the monolith as symbolic of a higher power, the multicolored ethereal journey as the rapture, Bowman’s death on Jupiter (or some other celestial body) as the end of life as we know it, and the star child (depicted at the very end of the film) as the rebirth of civilization.

But do you see what we’re discussing here?  Not the plot, per se, but far deeper connotations.  “2001” is an existential delight, which has, over the years, lent itself to deep discourse regarding human evolution and artificial intelligence.  Scholars have written entire theses on this picture.  “2001” is not simply a film about a failed Jupiter mission; it is a film about mankind.  Don’t expect it to fully make sense on the first viewing.  I take away something new from this picture every time I see it.  “2001: A Space Odyssey” is truly one of the greatest uses of film as an educational tool and as an art form in the 130-year-old history of the medium.