Nick Hornby’s 2009 novel “Juliet, Naked” was a scathing social criticism of the way the internet has enabled obsessed fans to essentially take possession of their idols from the comfortable confines of their own homes.  The story centers around a British man named Duncan who is consumed with the short career of an American singer/songwriter by the name of Tucker Crowe.  Crowe left the stage during intermission of a Minneapolis concert in 1993, never to return to the stage again – nor to ever release any new material.

Duncan considers Crowe a musical genius, and spends his evenings in web conversation with a handful of other die-hard Crowe fanatics around the world.  Upon hearing an acoustic demo tape of material for his last album “Juliet,” Duncan’s girlfriend Annie hops on the group’s site and publicly trashes it – resulting in a personal e-mail from none other than Tucker Crowe himself.  Several weeks of online conversation take place, eventually resulting in not merely a meeting but an actual relationship – leaving Duncan (the Crowe devotee) out of the loop, so to speak.  It’s a “just desserts” kind of plot twist that could only happen in the world of pop-culture literature.

Or pop-culture motion pictures.  Director Jesse Peretz has taken it upon himself to adapt this material to the big screen – but where the budding relationship between Tucker and Annie was designed to get under the proverbial skin of the obsessed fan in the novel, here it plays like yet another one of those celluloid coincidences that could only occur in Hollywood. 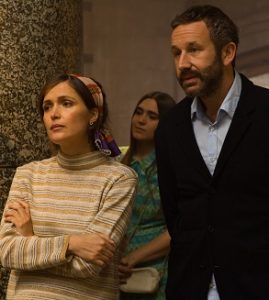 Chris O’Dowd plays Duncan, and Rose Byrne is Annie.  While never married, Duncan and Annie (but mostly Duncan) decided to forego having children in favor of spending the rest of their lives together in a committed relationship.  Ethan Hawke (in another strong performance) plays the American musician, who has sired five children by four different women – and has spent scarcely little time with them during their formative years.  The “Juliet, Naked” film seems more concerned with contrasting the breeding prowess of a loser like Crowe against the childless life of Annie – a woman who would appear to make an ideal mother – rather than attacking the fan-obsessed world of Duncan and his internet ilk.

In other words, Peretz’ version takes the easy way out.  The message of the novel is lost, in favor of a romantic comedy structure that resembles “You’ve Got Mail” more than it does the original source material.

Neither man is worthy 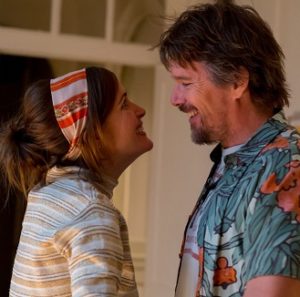 Furthermore, neither Duncan nor Tucker is presented as a worthy suitor to Annie.  Of the three leads, Byrne is the one who shines in this adapted screenplay.  Long overdue for a meaty role, Byrne’s Annie is presented with a choice between a music-geek lout who treats her as an outsider to his fixation on a long-defunct musician, and the musician himself – a man who can’t take responsibility for his own lifetime of bad decisions.  Granted, Hawke has that twinkle in his eye that makes Crowe a likeable guy.  But why a charming, intelligent British professional would have any interest in this loser is beyond me.  She can do better than either Duncan or Tucker.

But again, choosing between two suitors was never the intent of Hornby’s novel.  Unfortunately, Peretz’ film has repositioned “Juliet, Naked” in these terms at the expense of what could have been a hard-hitting indictment of extreme fandom.

Hats off to Rose Byrne, who turns in her best performance yet, and makes me wonder what she could do with a truly meaty role. 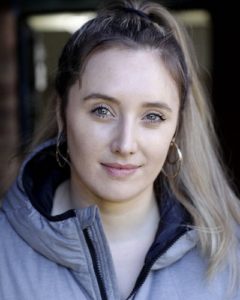 And a big, huge shout out to character actress Lily Brazier, who plays Annie’s lesbian sister Ros.  She’s a funny and heartwarming character, and Brazier seems to be the only cast member having any fun with this dreary, predictable material.  Why?  Because her character is a breath of fresh air – one we haven’t seen before in countless other films.  I would have preferred to see a film about the Ros character.  At least I wouldn’t have any idea where it’s going.

Would have liked different picture

To critique the picture we’ve been given, I’d call “Juliet, Naked” a subpar romantic comedy in which a delightful woman chooses a deadbeat over a dud.  To critique the picture that could have been made from Hornby’s novel is something I’ll apparently carry to my grave with me.  I likely would have enjoyed that film more than the one which opened this weekend.