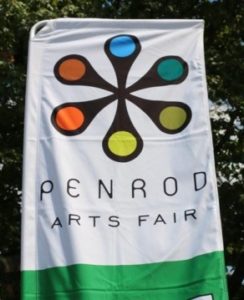 The Penrod Arts Fair is known as “Indiana’s Nicest Day.” From its beginning, the Fair, originally dubbed the “Arts Fair at Oldfields,” has been the The Penrod Society’s signature event and most significant fundraiser. The first Fair was a one-day, afternoon event (2p.m. to 7 p.m.) that took place at Oldfields on Saturday, September 9, 1967—the first Saturday after Labor Day. Public admission was $2 (rich in 1967!), and attendees were treated to—or, rather, enticed to attend with—free beer.  The event included live music, food and drink, paintings, and other art for sale.

In some ways, little has changed in 52 years. Today, the Penrod Arts Fair is still a one-day event taking place on the Newfields campus every year on the first Saturday after Labor Day, although now the Fair takes place from 9a.m. to 5p.m. In other ways, the Fair has changed dramatically.  The Fair is now one of the largest single-day arts fairs in the country.  The physical footprint of the Fair has grown significantly and now encompasses not only the land of Oldfields (now commonly referred to as the Lilly House), but also most of the other open outdoor spaces to the north and east of the IMA’s main building on the Newfields campus.