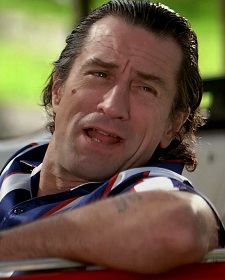 There are three types of Hollywood remakes.  The first occurs when a director remakes a Grade B also-ran and turns it into a first-class cinematic experience.  Think Martin Scorsese’s 1991 remake of “Cape Fear.”  He took a rough-around-the-edges B movie from 1962 and made it into a slick tour-de-force for Robert DeNiro, who played a deranged rapist stalking the family of his former public defender.  I like the gritty originality of the first version, but Scorsese upped the ante immeasurably.

The second occurs when an excellent film results from remaking a classic.  Consider Disney’s live-action 2017 remake of the 1991 animated classic “Beauty and the Beast.”  Yes, I liked the newer version (and I didn’t even know Emma Watson could sing), but I wondered why anyone felt the need to remake perhaps the greatest animated film of all time.  I still wonder.

The third (and unfortunately most common) category of Hollywood remake takes place when a classic is remade and ruined.  Less than a year ago, Shakespearean actor Kenneth Branagh remade Agatha Christie’s “Murder on the Orient Express.”  Branagh’s version wasn’t terrible, but as I watched it, I constantly found myself comparing it to the far superior 1974 version.  In other words, I’d say to myself, “Oh this is the Lauren Bacall character here,” or “This was Ingrid Bergman in the original.”  Not a good sign for Branagh.  And if I made those comparisons, others did too.

New version of a classic 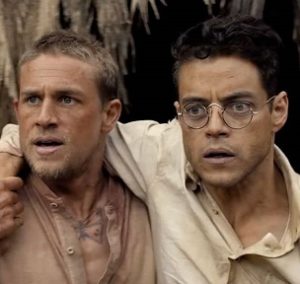 Which brings us to Danish director Michael Noer’s treatment of Franklin J. Schaffner’s 1973 classic “Papillon.”  Why anybody would attempt to remake a motion picture as timeless and iconic as “Papillon” is beyond me.  Not only has the original stood the test of time for lo these many years, but Steve McQueen and Dustin Hoffman excelled in performances which simply cannot be duplicated – by anyone, let alone two young television actors who have yet to cut their teeth on any truly meaty roles.

Charlie Hunnam (of “Sons of Anarchy”) plays Henri “Papillon” Charriere, a safecracker unjustly convicted of murder and sent to life imprisonment in French Guiana.  There he meets forger and embezzler Louis Dega, played by Rami Malek (of “Mr. Robot”).  Following an unsuccessful escape attempt, Papillon spends two years in solitary confinement.  Upon his release, Papillon, Dega, and two other prisoners escape to nearby Columbia, only to be discovered and routed to the infamous Devil’s Island – a harsh, brutal French penal colony from which no prisoner was said to have escaped.  Until Papillon.

Based on Charriere’s 1970 memoir, Schaffner’s film expertly captured the horror of the penal work colony environment – in which hardened criminals were shipped to live out the rest of their days as slaves to brutal taskmaster wardens.  These convicts were mean, brutal men, who almost never backed down from confrontation.  “Papillon” was not an easy film to watch, but it opened our eyes to a disciplinary system most of us never knew existed. 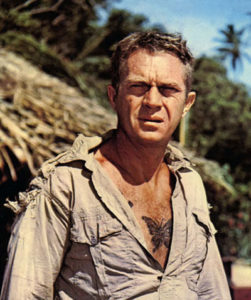 And Steve McQueen was an absolute joy to watch.  The Beech Grove, Indiana, native personified “cool” for the baby boomer generation.  He was the anti-hero for those raised on Viet Nam and Watergate.  His characters were typically classy ladies’ men who weren’t above fighting for that which they knew in their hearts was right and justified.  McQueen made many great films, but perhaps none better than “Papillon.”  His Henri Charriere personified everything that made us love him as an actor.  Even after being subjected to (eventually) two stints in solitary confinement, the French penal system was simply unable to break Charriere.

Great an actor as Charlie Hunnam may turn out to be, he’s no Steve McQueen!  Never will be.  No one can replicate Steve McQueen.  Or Paul Newman.  Or Robert DeNiro.  The fact that any studio would greenlight a remake of a Steve McQueen movie (particularly this one) further sours my opinion of the American motion picture industry as one completely and totally affected by the bottom line, as opposed to a sense of producing art. 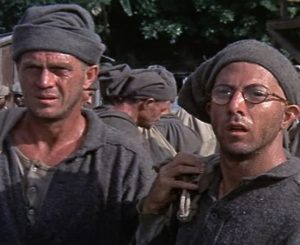 And what of Rami Malek?  He too merely goes through the motions.  Remember Dustin Hoffman’s fastidious Dega, who seemed to have lost his mind on the Devil’s Island sequence at the conclusion of the 1973 original?  Not only does Malek not convey such madness, but he doesn’t even try.  I realize this is a directorial decision, but this time the Dega character emerges with all his wits about him.  It’s bad enough to remake a classic, but it’s unforgiveable to change the ending to lessen the effects of the French penal system for no apparent dramatic reason.  In other words, if a nerd like Dega can surface unscathed from years on Devil’s Island, couldn’t anyone?  I’d love to know the impetus for this adjustment in the screenplay.  Was it because Malek was unable to convey the sense of mental confusion parlayed by Dustin Hoffman in the original?  If so, then cast someone else!

Project should never have been greenlighted

I didn’t like the idea of remaking “Papillon” before I ever saw the new version.  And now that I’ve seen it, I absolutely hate the idea!  Hunnam lacks that twinkle in his eye that made McQueen special.  With Hunnam, we aren’t privy to that internal determination to emerge victorious over a system which had broken many men; that sense of determination made us love the McQueen character.  Here, director Noer (and by extension Hunnam) seems to be mimicking the original, but nothing more.  It’s the “paint by numbers” approach to filmmaking.  Failed escape attempt?  Check.  Period of solitary confinement?  Check.  Second escape attempt?  Check.  All the boxes are checked, but the passion has been drained.  I think I might have had a stronger emotional response to simply reading the screenplay!

The ending to this new, unnecessary remake feels more like relief than triumph.  When McQueen jumped into the ocean in the original, audiences cheered.  This time, they’ll completely miss the scene, because they’ll be asleep.