Miguel at the Murat 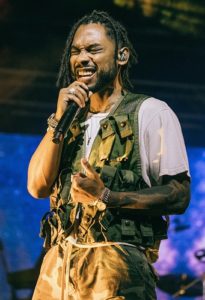 Having just completed his sold-out spring tour in early April, Grammy Award-winning singer/songwriter Miguel has announced that he will embark on a North American tour this fall in support of his critically praised fourth studio album, War & Leisure.  The 26 date tour kicks off on August 23rd in Boston, Massachusetts, hitting major markets in the US and Canada throughout August and September, including festival appearances at AFROPUNK in Brooklyn, North Coast Music Festival in Chicago, and Life is Beautiful Festival in Las Vegas, concluding on September 28th in Seattle. OVO’s dvsn will provide support and join Miguel for all North American dates

Over the weekend Miguel performed to an elated crowd of hometown fans at the Smokin Grooves Festival and on June 22nd he will be performing live at the BET Awards. Last week to celebrate the initiation of the 2018 World Cup, Miguel narrated and starred in the new Major League Soccer ad campaign “Our Soccer“.