A Comedy of Tenors at ATI

Actors Theatre of Indiana (ATI) has announced the cast for the upcoming season opener, “A Comedy of Tenors,” scheduled for September 7th thru 30th at the Studio Theater in Carmel at the Center for the Performing Arts.

Four new faces will join a cast of veteran actors in this, the 14th season opener for Central Indiana’s home for Broadway in Your Backyard. 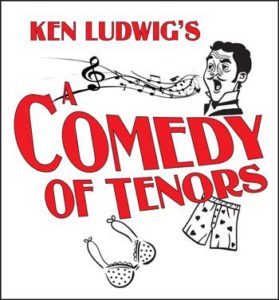 In its Indiana premier showing, “A Comedy of Tenors” is currently sweeping the country and playing to sold out audiences as the characters from the 1986 Tony Award winning “Lend Me a Tenor” are back in this fast-paced, over-the-top farce!  One hotel suite, four tenors, two wives, three girlfriends, and a soccer stadium filled with screaming fans.  What could possibly go wrong?  It’s 1930s Paris, and the stage is set for the concert of the century — as long as producer Harry Saunders can keep Italian superstar Tito Merelli and his hot-blooded wife Maria from causing runaway chaos.  Prepare for an uproarious ride, full of mistaken identities, bedroom hijinks, madcap delight, and the music of “La Traviata.”  “A Comedy of Tenors” evokes the classic screwball comedies of an earlier time.