The Indianapolis Symphony Orchestra’s 2018-19 season is packed with a variety of amazing concert experiences, and single tickets are on sale today! 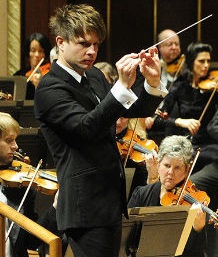 You’re invited to join the ISO for your favorite concerts of our upcoming season. There is something for everyone at the historic Hilbert Circle Theatre this year – from the entire Brahms Symphony cycle conducted by Music Director Krzysztof Urbański to an evening with Broadway legend Sutton Foster under the baton of Principal Pops Conductor Jack Everly, and everything in between.

In addition to the wide range of guest artists and programs initially announced for the full season, we are delighted to share the following additions to the upcoming season:

Single tickets for all 2018-19 season concerts are available today; you can make purchases online at indianapolissymphony.org, in person at our box office on Monument Circle, or by phone at 317.639.4300. We look forward to seeing you at a concert very soon!