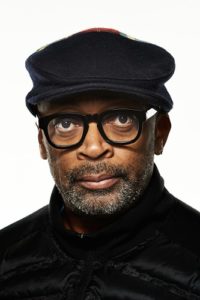 Spike Lee has never been subtle.  In fact, much of his best work (“Do the Right Thing,” “Malcolm X”) is among the least understated cinema of the past 30 years.  That’s not a knock on Lee.  Sometimes we (and by “we,” I mean White America) need to be hit over the head with a proverbial shovel to walk in the shoes of our African-American brethren.  Lee’s latest, “BlacKkKlansman,” is perhaps his least delicate effort yet.  It tells the true story of Ron Stallworth – the first black officer on the Colorado Springs police force – and his mission to infiltrate and expose the Ku Klux Klan in 1972.

Based on Stallworth’s autobiography, Lee’s screenplay plays true to the facts (and, as you might expect, deftly transports us back to a time when music was good, racial tensions were high, and our president had ascended to office, in large part, by playing on the racial fears of rural white Americans).  But make no mistake.  “BlacKkKlansman” is a film for the years of the Trump administration.  Lee bookends Stallworth story with scenes from D.W. Griffith’s “The Birth of a Nation,” footage from the 2017 Charlottesville rally, and that of President Trump’s public failure to denounce the Klansmen and neo-Nazis who instigated that tragedy.  Was footage of Archie Bunker left on the cutting room floor?  It would have fit in well.

Lee seems to be asking us why any of us voted for a man so hellbent on returning America to a time when African-Americans (then known as “negroes” or worse) were seen as a minor evolutionary step above monkeys, and were consigned to the trash heap of societal waste.  Although Trump would never admit it, some of his supporters have.  And their actions go, by and large, unpunished. 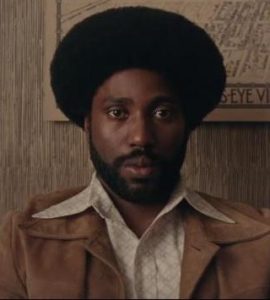 Reluctantly hired as Colorado Springs’ first black cop, Stallworth (a driven and confident John David Washington, son of Denzel) tires quickly of working the records room, and asks for a more challenging assignment.  Tasked with attending a Stokely Carmichael speech at a local black college (lest things “get out of hand”), Stallworth meets Patrice Dumas (Laura Harrier), head of the school’s black power movement.  The two maintain a relationship throughout the remainder of the film, albeit never as close as it could be, given Patrice’s abhorrence of cops (or “pigs,” as she so eloquently calls them).

Upon reading a recruiting brochure, Stallworth (using his best “white” voice) calls the local Ku Klux Klan recruiter and asks to join.  To his surprise, the local grand dragon invites him to a meeting.  Acknowledging the obvious fact that Stallworth will be unable to “play himself,” a fellow officer is chosen – primarily for his ability to sound like Stallworth’s “white” voice.  That cop is Flip Zimmerman, a Jewish officer played by Adam Driver.  During the ensuing contact with the local Klansmen (which admittedly drags a bit in the middle of the film, despite an otherwise tight screenplay), Zimmerman learns firsthand of the equally racist stance the Klan harbored against Jews.

Hearing some of the racially insulting language, and watching the enthusiasm of the rallies and meetings, is downright repulsive to those of us raised to love all human beings.  At least we knew Archie Bunker was a joke.  This is some pretty heavy stuff, and Lee ensures that we get it – that we understand not only that people like this existed in 1972 but, perhaps more openly, today.

What a glorious contrast “BlacKkKlansman” is to the current Fred Rogers biography “Won’t You Be My Neighbor?”  The Rogers film reminds us that no one is born racist.  No one is born hating others.  When children first learn to hate, that hatred is personal – e.g. When a bully continually takes toys from another, the victim will come to hate the bully.  But the hatred exposed in “BlacKkKlansman” is a learned trait.  Children don’t inherently hate those with other skin colors, or from other countries, or with different accents.  That behavior can only be taught.

In “BlacKkKlansman,” Lee shows us the horror of allowing such hatred to fester – and to be passed down from generation to generation.  In his Charlottesville footage, it is important to note how many of the anti-Klan protesters were white (including the woman killed when a white supremacist drove a car into a crowd of protesters).  This contrasts (intentionally or not) with the scripted footage of the Klan meetings and black student rallies of 1972.  Perhaps our society has made positive changes during the 46 years since Ron Stallworth became the first black cop in Colorado Springs.  But as Lee points out, we have so very, very far to go.