Road warriors Umphrey’s McGee will be back on the road in summer 2018 in support of their latest album, it’s not us. The tour will make a stop in downtown Indianapolis on Saturday, August 11 at the Farm Bureau Insurance Lawn at White River State Park along with special guests Spafford.

Tickets are on sale at LiveNation.com, all Ticketmaster outlets, and the Old National Centre box office and by phone at 1-800-745-3000. 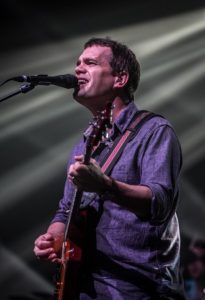 The music of Umphrey’s McGee unfolds like an unpredictable conversation between longtime friends. Its six participants—Brendan Bayliss [guitar, vocals], Jake Cinninger [guitar, vocals], Joel Cummins [keyboards, piano, vocals], Andy Farag [percussion], Kris Myers [drums, vocals], and Ryan Stasik [bass]—know just how to communicate with each other on stage and in the studio. A call of progressive guitar wizardry might elicit a response of soft acoustic balladry, or a funk groove could be answered by explosive percussion. At any moment, heavy guitars can give way to heavier blues as the boys uncover the elusive nexus between jaw-dropping instrumental virtuosity and airtight songcraft.

The conversation continues on their eleventh full-length album, it’s not us [Nothing Too Fancy Music]—released January  2018.