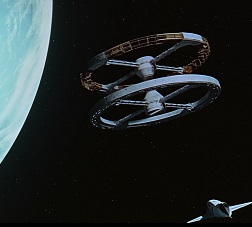 Continuing the 50th anniversary celebration of Stanley Kubrick’s science fiction masterpiece 2001: A SPACE ODYSSEY Warner Bros. Pictures is bringing the film to the IMAX Theater in the Indiana State Museum.  The downtown Indy IMAX will be one of only five theaters to receive a 15/70mm print of the film.

The IMAX® 70mm film print, to be shown exclusively in five IMAX locations is created from the recently released “unrestored” 70mm print—a true photochemical film recreation struck from new printing elements made from the original camera negative with no digital tricks, remastered effects, or revisionist edits.

This marks the first time ever that moviegoers will have the opportunity to view the seminal film on the largest possible screen, creating a truly immersive experience.  The 15/70mm film release of 2001: A SPACE ODYSSEY was overseen by acclaimed filmmaker Christopher Nolan, a lifelong admirer of Kubrick’s.

To honor Nolan’s recent work, the downtown Indy IMAX will also relaunch THE DARK KNIGHT in 15/70mm for a limited time, one-week engagement to accompany his restoration of 2001: A SPACE ODYSSEY.

Widely considered among the greatest films of the 20th century, 2001: A SPACE ODYSSEY was originally released on April 4, 1968, igniting the imaginations of both critics and audiences.  With the film, Kubrick redefined the limits of moviemaking, and cemented his legacy as one of the most revolutionary and influential motion picture directors of all time.

“This movie can only really be appreciated in celluloid,” said Craig Mince, IMAX Theater in the Indiana State Museum theater manager. “We want to make sure that fans of the movie know that if they come out on September 7, they are going to have a very exclusive chance to see ‘2001’ in a way few people will have.”

“2001: A Space Odyssey” was directed and produced by Kubrick from a screenplay he co-wrote with legendary science fiction author Arthur C. Clarke.  The film stars Keir Dullea and Gary Lockwood.

The IMAX Theater in the Indiana State Museum is the premier and only theater to see these films, as it is the largest screen in the state.  Advanced tickets and reserved seats are on sale online now. In addition to offering exciting and educational cinematic options, the downtown IMAX validates parking in the White River State Park parking garage for moviegoers. For more information and tickets, visit www.imaxindy.com.