Collin is a convicted felon with three days left of his year-long probation.  He lives in a halfway house with a strict 11:00 PM curfew.  He has a daytime job as a mover in his hometown of Oakland.  Things are going about as well as can be expected – save for just one issue.  His name is Miles.  Miles may as well have “trouble” tattooed on his forehead.  (He has a lot of tattoos, but that isn’t one of them.)  And if trouble doesn’t follow Miles from place to place, he brings it with him.  Collin and Miles are childhood friends, and they both work for the save moving company – in the same truck.  They spend their workdays together – and, unfortunately for Collin, most of their evening hours as well. 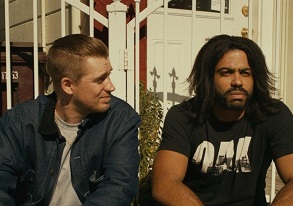 Lest this setup sounds less than completely captivating, consider this one caveat:  Collin is black; but Miles is white.  Miles is the hothead and social outcast; but Collin is the one serving time.  See where this is going?  After following the pair through several days of introductory scenes, we learn the specifics of the crime for which Collin was imprisoned.  Miles was the instigator; but Collin was the black man holding the gun.  Collin served time; Miles remained a free man.

Collin and Miles are played by Daveed Diggs (Thomas Jefferson and Marquis de Lafayette in “Hamilton”) and Rafael Casal (a poet, writer, and rapper).  Diggs and Casal also wrote the screenplay for “Blindspotting,” one of this year’s most original and hard-hitting pictures.  The director is also a newcomer, Carlos Lopez Estrada, who knows Casal through their mutual live theatre rap workshops in New York.

Interestingly, the freestyle “make-it-up-as-you-go-along” rap style of these workshops infiltrates the “Blindspotting” screenplay.  When Collin and/or Miles are faced with particularly stressful situations, they begin verbalizing their thoughts, seemingly inadvertently rhyming, and, next thing we know, full-out rapping.  And the funny thing is that it works.  On paper, I pictured the protagonists breaking the fourth wall, speaking directly to the audience, and disrupting the flow of the action.  But that’s not the case.  Instead, the freestyle rap remains within the characters of Collin and Miles.  In other words, other “Blindspotting” characters are privy to these raps.  The rapping is merely an extension of the lead characters.

However, the screenplay is so strong it would have worked even without the foray into rap.  “Blindspotting” is a compelling look at today’s inner-city society that pulls no punches in laying bare the current state of race relations.  Just days from the conclusion of his parole period, Collin witnesses a white police officer gun down a black man in cold blood – a scene which continues to aggravate him in his dreams and during his daily life.  Could Collin be planning to approach the police (or an attorney) as a witness?  If so, should he wait until his parole is over?  Will the fact that he’s a felon cause his witness to carry less weight than had his record been clean? 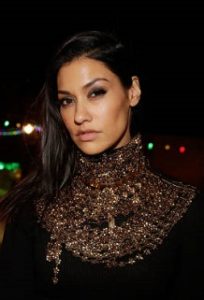 Serving the role of Collin’s conscience is his ex-girlfriend Val (character actress Janina Gavankar), dispatcher at the moving company, studying for a psychology degree (an irony not lost on this viewer).  We are led to believe Val has left Collin because he continues to prove unable to uncouple himself from Miles.  But that childhood friendship runs deep, and “Blindspotting” contains several scenes that cement their relationship even when pure logic calls for complete disassociation.  Also strong is Jasmine Cephas Jones as Miles’ long-suffering wife, desperately trying to keep his street life away from their young son.

And the city of Oakland is practically a character in and of itself.  Much as the backdrop of the Texas oil glut was the impetus for all the action in “Hell or High Water,” Oakland itself serves that purpose in “Blindspotting.”  A melting pot of black, white, Hispanic, and Asian, Oakland appears to have created its own hierarchy of societal standing – with European-Americans at the top and African-Americans at the bottom.  Through Collin’s eyes, slow-moving police cars are as frightening as the Gestapo vehicles of “The Diary of Anne Frank;” to Miles, their presence barely registers.  Through Collin’s eyes, the mere existence of firearms spells trouble (think parole violation); to Miles, guns are simply a part of life.

Modern-day “Do the Right Thing”

The fact that Miles exhibits almost no sympathy for Collin’s capacity to run afoul of the law further accentuates the point of “Blindspotting.”  This is a modern-day “Do the Right Thing” – an in-your-face wake-up call to white people unable to see the world through the eyes of African-Americans.  Sure, it would have been easy to write the character of Collin as the thug – and Miles his conscience.  But by turning racial stereotype on its proverbial head, Diggs and Casal have created a contemporary masterpiece.  I predict “Blindspotting” is one we’ll watch years from now and comment that it was way ahead of its time.