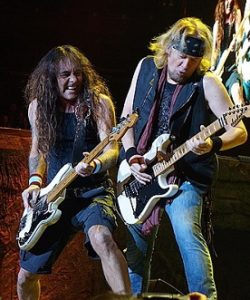 IRON MAIDEN will bring the Legacy Of The Beast Tour to North America in 2019 for an extensive series of arena and amphitheater shows produced by Live Nation, including a first ever headline appearance at the Banc of California Stadium in LA. The tour will cover a total of 33 cities right across the U.S.A. and Canada, including Portland, Oregon where they haven’t played since 1987 on the Somewhere In Time Tour, Hartford, Connecticut where they last played in 2005, and many other places not visited since the Maiden England 2012/13 Tour. The tour will appear at Ruoff Home Mortgage Music Center in Noblesville, Indiana on Saturday, August 24, 2019.

The band’s triumphant first leg of the Legacy Of The Beast Tour opened in Europe earlier this year to outstanding critical acclaim, not just by the 750,000+ fans who came to see the show but right across national press and rock media, including The Times (UK) newspaper calling it “..an extraordinary show filled with world class theatrics…a masterclass in performance and staging.”

Tickets will go on sale to the general public beginning Friday, November 16th at 10am local time at LiveNation.com. As always, there will be an exclusive pre-sale for IRON MAIDEN fanclub members. Go to www.ironmaiden.com for all ticketing details.