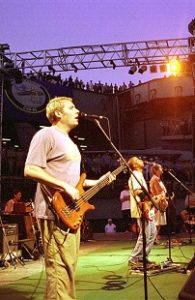 Iconic pop-rock band Hootie & the Blowfish appeared on NBC’s TODAY to announce a highly anticipated return to full-time touring in 2019, as the foursome sets out on the 2019 Group Therapy Tour with direct support from special guests Barenaked Ladies. The tour will appear at Ruoff Home Mortgage Music Center in Noblesville, Indiana on Saturday, August 17, 2019 as part of the Coors Light Concert Series.

Tickets are on sale through livenation.com.

About Hootie & the Blowfish

With the rich, bluesy vocals of Darius Rucker and gleeful harmonies of guitarist Mark Bryan, bassist Dean Felber, and drummer Jim “Soni” Sonefeld, Hootie & the Blowfish have sold over 25 million records worldwide to date after their infectious melodies hit the airwaves in 1995 with hits such as “Hold My Hand“, “Let Her Cry,” and “Only Wanna Be With You.”

The quartet met at the University of South Carolina where endless gigs at frat houses and local bars built a major local buzz. Their blend of pop, folk, blues, soul, and rock made them hard to pigeonhole, but easily accessible to anyone who loved good music. 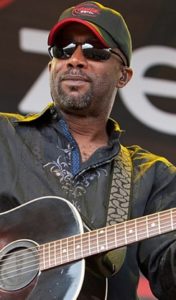 The band remained a top draw nationwide and released five more albums for Atlantic: Fairweather Johnson, Musical Chairs, Scattered Smothered & Covered, Hootie & The Blowfish, and The Best of Hootie & The Blowfish, as well as Looking For Lucky on their own Sneaky Long Records and LIVE in Charleston, The Homegrown Concert Event DVD and CD. The band took a break from full-time touring in 2008, reuniting annually for a variety of philanthropic events while also pursuing solo projects. 2019 will mark the band’s first full-time touring year in over a decade as they embark on the Group Therapy Tour in support of forthcoming new music under a new record deal with Universal Music Group Nashville.