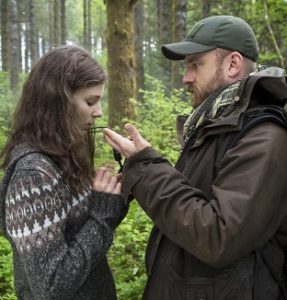 A man and his teenage daughter are camping in the woods.  They seem to be eerily adept at outdoor living.  Their skills put Eagle Scouts to shame.  Apparently living with no matches or lighters, they start their campfires by flint and steel – without the aid of crumpled newspapers.  They grow their own food.  They have no phone, no car, nor any contact with the outside world – although they do occasionally make grocery runs.  In their spare time, they read books and play chess.

But before the sound mixer can cue the Jim Croce music, the man and his daughter engage in a tracking drill.  She has ten seconds to hide from him, and he must find her – crouched under forest vegetation.  This would seem an odd exercise for a weekend of camping.  Ahh, but this is no weekend.  This is life.  You see, Will (Ben Foster) is a veteran suffering from some form of PTSD.  His 13-year-old daughter Tom (Thomasin Harcourt McKenzie) has been without her mother so long she has no recollection of her.  The pair lives in a large public forest outside Portland, Oregon.

“Leave No Trace” is director Debra Granick’s first non-documentary feature since 2010’s “Winter’s Bone” – the Oscar-nominated film that made Jennifer Lawrence a star.  Exploring similar themes of family ties and self-sufficiency, “Leave No Trace” hits its stride when police, working from a tip, locate Will and Tom, and bring them into the “real world” for questioning.

Acclimation to the “real world”

As their current living situation is illegal, a social worker places them in the custody of a tree farm owner who needs help preparing for the upcoming Christmas tree season.  Will is to help around the farm, and Tom is to attend school in the fall.  As in Lenny Abrahamson’s 2015 classic “Room,” the child adapts more easily to the outside world than does the parent.  While her father has trouble taking a computerized skills test, Tom acclimates well to church, and meets a boy who invites her to his 4H meeting.  Tom wants to make the effort to adapt and meet others; Will does not.

While this may sound routine, don’t think for a minute you know where Granick’s screenplay (adapted from Peter Rock’s novel “My Abandonment”) is headed.  Yes, Will has a burning desire to return to the comfort of isolation – much as some homeless individuals feel more complacent on the streets than in shelters – and Tom does not share this desire, as she matures and is gradually introduced to the outside world.

During a subsequent attempt at wilderness survival – this time in neighboring Washington – tragedy ensnares the pair, and they are essentially adopted by the members of a loose-knit RV park (more like a collection of trailers), who look after Will and Tom.  A lady named Dale (character actress Dale Dickey, who also starred with Foster in “Hell or High Water”) introduces Tom to beekeeping and how to feed bears.

Tom likely imagines her mother as a nurturing figure like Dale.  But fortunately Granick’s (and co-writer Anne Rosselini’s) screenplay doesn’t have to spell this out for us.  The pacing is deliberate enough to allow us time to fill in the blanks with our own thoughts – a far cry from the smash-‘em-up superhero fare which infiltrates the local multiplex this time of year.

“Leave No Trace” is a soft, subtle film, in which the beautiful outdoors is contrasted with the confinement of daily city life.  Thanks to cinematographer Michael McDonough, we can almost smell the pines through the muted sunshine at the RV encampment.

Ben Foster’s soft-spoken and internally tormented Will is as 180-degree opposite a character as his brash career-criminal turn in “Hell or High Water.”  Will is a firm parent – yet righteous and understanding.  That he pulls off each role with such confidence is a testament to Foster’s skill as an actor.  He’s one that could break out within the next few years and become a huge star.  And young Thomasin McKenzie turns in one of the most non-pretentious teen performances I’ve seen in a while.  The two characters share a bond which has carried them through a lot, and the actors rise to the task of conveying this relationship – again, often without spoken dialogue.

And I appreciate the fact that “Leave No Trace” doesn’t fill in every blank.  We never do learn what happened to Tom’s mother.  Nor does the film become a rallying cry for understanding of those suffering from PTSD.  That would perhaps make for an interesting movie; but that is not the aim of this particular movie.

“Leave No Trace” is simply a story – of unbreakable family bonds.  Of a father so isolated he’s more helpless without his daughter than she is without him.  Of a girl taught to be self-sufficient by the very individual most able to keep her from fulfilling her promise.  There’s a lot going on here.  Volumes are spoken through silence.  And those of us who long for worthy summer motion picture fare are subject to a real treat.