GRAMMY® Award-nominated, multi-platinum songstress Halsey announces her 2018 summer world tour dates!  All over the world, Halsey will be accompanied a team of incredible, buzzing, accomplished female artists. In Australia & New Zealand, Bay Area hit maker Kehlani will be a special guest. In Latin America, Fifth Harmony’s Lauren Jauregui,  featured on Halsey’s “Strangers,” will be supporting on her debut tour. Rising soul crooner Jessie Reyez will support Halsey on the North American leg, produced by Live Nation. Jakarta’s own emerging singer, Niki, will accompany Halsey on tour in Asia. The tour will make a stop in downtown Indianapolis on Tuesday, July 17 at the Farm Bureau Insurance Lawn at White River State Park. 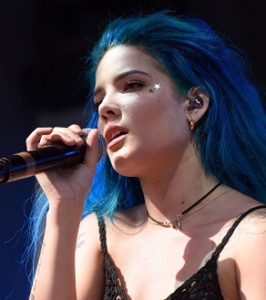 Halsey pushes creative boundaries expanding her influence and impact beyond music. High-end fashion retailer Yves Saint Laurent recently tapped her as a brand ambassador of YSL Beauté where she will help create and share makeup looks for the prestigious brand.  She will also make her big screen debut as she joins the cast of the animated movie Teen Titans GO! As the voice of Wonder Woman—in theaters July 27. Also, GLAAD has nominated her for “Outstanding Music Artist.” Recently, Halsey spoke at the 2018 Women’s March advocating for equality.  Her raw oration has been viewed millions of times and has moved people from around the world.

Halsey recently graced the stage of SNL with “Bad At Love” and also performed with G-Eazy on their Bonnie and Clyde themed platinum-certified “Him & I” – a song which continues to dominate at #1 on Billboard’s Pop Songs Airplay Chart and #1 at Top 40 radio (marking the second #1 she features on since accompanying The Chainsmokers on “Closer”, which ruled radio at #1 for 11 weeks).  In addition, her own two double-platinum-certified singles, “Bad At Love” and “Now Or Never” also peaked in the top 3 at Top 40 radio.

Tickets are on sale at LiveNation.com, all Ticketmaster outlets, and the Old National Centre box office and by phone at 1-800-745-3000.