Pity the poor screenwriter tasked with conjuring up yet another road trip movie.  At this point, we’ve seen ‘em all.  From the free-spiritedness of “Thelma and Louise” to the amiability of “As Good as it Gets.”  Some are masterpieces.  Remember Alexander Payne’s 2013 classic “Nebraska?”  And wait ‘til you see “The Long Dumb Road,” which hits this fall.  But alas, more and more road trip flicks are duds.  It’s just difficult to breathe new life into a tried and true formula. 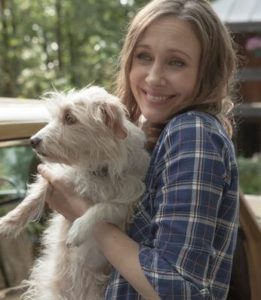 Enter Shana Feste’s “Boundaries,” a well-meaning but convoluted mess which could only exist in the mind of a Hollywood screenwriter (Feste herself, in this case).  The always appealing Vera Farmiga plays Laura Jaconi, a middle-aged single mother trying to raise her teenage son Henry, played by Lewis MacDougall.  Henry is expelled from his school for continually drawing naked pictures of various teachers and staff.  His artwork is excellent, but the principal believes Henry would be better off at a small private school specializing in social outcasts with exceptional artistic talent.

As if that bombshell weren’t enough for one day, Laura’s estranged father Jack (the irascible Christopher Plummer) is kicked out of his nursing home for various infractions – essentially being a jerk to the staff and other residents.  Laura decides to drive Jack from Seattle all the way to Los Angeles to live with her sister JoJo (comedienne and voice actress Kristen Schaal).  Why not simply fly?  Apparently, Jack isn’t in good enough health to fly – although he seems perfectly fine to the casual viewer.

And this plot contrivance is the first of many Feste throws at us to justify the plot structure.  Turns out Jack is a major pot-dealer who wants to make several stops (sales, actually) along the way.  Smart as Laura is in almost every other aspect of the screenplay, she’s too stupid to realize her own father is dealing dope at each of their stops – including to her own ex-husband!

The usually engaging Bobby Cannivale plays Laura’s ex, Leonard – a true blockhead in every sense of the word.  He hasn’t had any contact with poor Henry since he moved out three years earlier.  And now he wants to buy a huge adult-diaper full of dope from his ex-father-in-law – who himself had very little contact with Laura and JoJo during their formative years.  I realize studies show we tend to marry those who remind us of our parents, but this is ridiculous.  Again, Laura seems like a smart person in most other respects.  The fact that she apparently still harbors feelings for Leonard is beyond absurd, and is yet another plot-bending fabrication of this absurd screenplay.

I believe the fact that Jack (with Henry’s help) has wrapped the bags of marijuana in adult diapers is supposed to be funny.  But again, it comes off as merely implausible.  Same with the fact that good-hearted Laura has a habit of personally rescuing stray dogs and cats.  Yes, that helps us understand her character’s sympathy, but I believe the fact that she feels compelled to bring a couple or three dogs along for the road trip is supposed to be played for laughs.  But since none of these animals is provided a personality, they seem more like unfunny props sitting in the back seat.

Jack’s other friends/customers include Christopher Lloyd and Peter Fonda in roles that could have gone to unknown actors, as the script doesn’t allow them to prove why they appear in “Boundaries” in the first place.  And a hold-up/robbery at Fonda’s house is so blatantly improbable that watching it made me feel embarrassed for anyone and everyone involved in making this mess.

And that includes Christopher Plummer – one of the great stage and screen actors of his generation, relegated here to playing a character whose intelligence falls so far below his own that it’s difficult to accept him in the role.  Remember Jack Nicholson as the mafia hit man in John Huston’s “Prizzi’s Honor?”  Same deal.  It was hard for me to accept a man as smart as Nicholson playing “down” to such a dumb character.  Woody Harrelson pulls off dumb characters with aplomb.  Nicholson couldn’t do it.  Neither can Plummer.

I suppose the most accurate recent comparison I can conjure for “Boundaries” is “Nebraska.”  In that film, Bruce Dern played the cantankerous curmudgeon whose son drove him from Montana to Nebraska to cash in a lottery ticket – which I realize was also a plot contrivance, but the real impetus for the journey was to visit extended family.  And that’s a lot more plausible than selling dope out of the trunk of a Rolls-Royce with a teenage grandson who’s in on the game but the daughter/mother isn’t.

But “Nebraska” was instantly engaging, Dern gave the best performance of his entire career, and Bob Nelson’s screenplay was littered with colorful side characters and engaging vignettes.  It still ranks as one of the ten best pictures I’ve seen this decade.  “Boundaries,” while utilizing a similar structure, is not.

One of this year’s worst

My issue isn’t with the architecture of the road trip saga, overused though it may be.  My issues are the fact that nothing new is done with it here, and that we’re expected to accept a ton of artifice simply to make the plot work as it is written.  This entire project should never have been green-lighted in the first place.

But again, stay tuned for “The Long Dumb Road,” currently scheduled for a November release.  Just when you thought the road trip framework couldn’t be improved…