Quick, name the last great horror movie.  I’m waiting.  Still waiting.  Yes, I know “Get Out” received a lot of acclaim last year, but it was more of a promising set-up about the way many white people view black people that happened to turn into a horror story in time for the ending.  In other words, screenwriter/director Jordan Peele teased us with what could have been an excellent social commentary, but opted for a horror-film framework rather than explore the potential established at the beginning.

No, I’m thinking of a real, good ol’ fashioned scare fest.  Something along the lines of “The Exorcist” or “Halloween.”  While I’m admittedly not typically a fan of the genre, it seems to me the last true gem was M. Night Shyamalan’s debut feature “The Sixth Sense” from 1999.  That’s the flick that featured a young Haley Joel Osment creepily whispering, “I see ghosts,” in one of the most memorable motion picture lines ever.  That’s also the picture that garnered Toni Collette an Oscar nomination as Osment’s long-suffering mother.

Ironically, it is Collette who now almost two decades later stars in perhaps the best horror film since “The Sixth Sense.”  And even though it’s only summer, Collette’s name has already been receiving Oscar buzz for her role as the haunted mother of one of Hollywood’s most disturbing recent characters – 13-year-old Charlie, played by newcomer Milly Shapiro.

Family is a little off

“Hereditary” (another directorial debut, this time by Ari Aster) begins with Colette’s Annie Graham giving the oddest eulogy I think I’ve ever seen in a movie.  She speaks frankly about her mother’s “private friends,” and her distant yet powerful grip on the Graham family.  As we get to know the Grahams in the scenes following the funeral, we realize something is very strange about this family.  They’re not possessed by the devil, or from another world, or anything we might expect from a horror movie.  No, the Grahams are just a little off.  Grandma obviously deeply affected each family member in her own way.  We don’t know exactly how yet, but we see the results.

Annie’s husband Peter (Gabriel Byrne) is by all appearances a decent man, albeit distant.  His goal appears to be to keep the peace.  Charlie, a downright disquieting middle-schooler, sketches her way through life by creating ominous drawings of the major players in her life.  High schooler Peter (Alex Wolff) seems to be the most “normal” of the lot, although he escapes whatever has happened in the past by smoking marijuana with his friends.

Annie is an artist of miniatures, in the process of compiling a huge creation for a promoter gently pushing her to hurry up and finish her work.  The creation appears to be a replica of the Graham’s house, with each family member represented one or more times.  We don’t understand every reference, but we presume that knowledge is imminent.

While Annie was not particularly close to her mother, coping with the loss of a loved one is always difficult, and she eventually visits a grief recovery workshop.  Joan (character actress Ann Dowd) is a group member who connects with Annie over their mutual recent losses.  Her friendliness leads us to believe Joan may be hiding something – this is a horror film, after all.  And at this point, I am unable to reveal any more of the plot without spoiling the “fun.”  Suffice to say that “Hereditary” is likely to continue to frighten viewers long after the credits have rolled.

Now, why is “Hereditary” such a perfect entry in a genre more known for blood and gore than real scares?  Primarily because Aster’s original screenplay is tight.  And by that I mean that, for once, everything in a fright-fest makes sense.  Everything that happens occurs for a reason, although in most cases we don’t learn why until much later.  Every séance has meaning.  Every connection to the dead is well thought out.  Even the standard cold, dimly-lit, wood-floor house in the isolated forest is creepy for a reason.

Not once does Aster pull the proverbial rabbit out of the hat.  How many horror films surprise us with occurrences that are scary for no other reason than we couldn’t have predicted them?  Most!  Here, everything makes sense.  The screenplay is watertight.  You’ll want to re-watch this one immediately, to see how all the puzzle pieces fit neatly together. 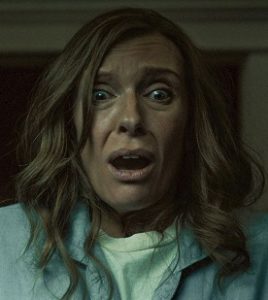 Of all the character’s Annie’s role is the key, and Collette is flawless.  As Annie becomes increasingly unglued, Collette deftly walks the axiomatic tightrope between underplaying her concern for her family and becoming so completely rattled we cease to empathize with her.  I know it’s early, but Toni Collette is Oscar worthy.

If I had to compare “Hereditary” to something in our collective conscience it would be Roman Polanski’s 1968 classic “Rosemary’s Baby,” in that his adapted screenplay is airtight, Mia Farrow plays her role to the hilt, and the protagonist increasingly feels the world closing in around her.  In both pictures, those originally presumed friends turn out to have ulterior motives, resulting in a claustrophobic feel.  Similar to Farrow’s Rosemary, as Annie learns more about her mother’s cult, we wonder where she can find a sympathetic ear.

No one single fright

Furthermore, neither film contains any one single frightening scare.  Nothing jumps out from behind a cabinet.  Nothing grabs a character by the neck.  “Hereditary” is above those conventions of a genre which has produced far more crap than masterpieces.  I’m excited to say this film belongs in the second camp.