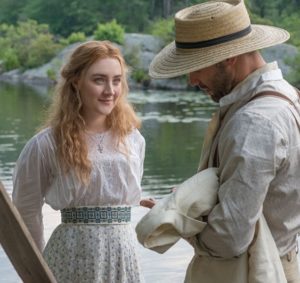 Russian playwright Anton Chekhov had a reputation, for better or worse, for writing deep, complex characters and then giving them nothing to do.  Characters in search of a plot, as it were.  His 1896 offering “The Seagull” was roundly criticized for lacking a discernable narrative, but was rediscovered two years later and became a big hit.  Now American theatre director Michael Mayer has brought “The Seagull” to the big screen, and, as expected, the result is a showpiece for the various actors and actresses, but serves no real purpose that couldn’t have been accomplished by a national stage production.

Annette Bening stars as Arkadina, an accomplished actress without a humble bone in her body.  In a part seemingly tailor-made for her talents, Bening’s Arkadina is never shy to display her massive sense of self-worth – even belittling the abilities of her struggling playwright son Konstantin (a conflicted Billy Howle), who’s madly in love with his young actress muse Nina (Saoirse Ronan).  As she does each summer, Arkadina pays a long visit to her brother Sorin (Brian Dennehy) who happens to live with Konstantin on a large country estate outside of Moscow.  Nina lives on a neighboring estate.

This particular year, Arkadina brings a companion – a successful author named Boris, played by Corey Stoll.  Initially infatuated with nothing more than the presence of an established writer (coupled with Konstantin’s increasingly self-defeatist attitude), Nina takes a liking to Boris, which he reciprocates in spades – even admitting his inability to resist beautiful young women.  Meanwhile the eternally gloomy family friend Masha (Elizabeth Moss) possesses an unreciprocated longing for Konstantin, but seems to be “settling” for a local schoolteacher (Glenn Fleshler).

No reason to film this material

As is common in Chekhov’s work, unrequited love would appear to be the theme of “The Seagull.”  The large gathering of characters on a country estate is also prevalent in his work.  So the basic set-up of Mayer’s film is no different from what we’d expect of a motion picture adaptation of a Chekhov play.  It’s like an especially poetic and refined version of much of Woody Allen’s work.  Given our expectations, Mayer’s version advances no coherent reason for existing.  Yes, some of the outdoor scenes are aesthetically pleasing, but these actors could have pulled off this material perhaps more successfully on a stage – where they would have free reign to fully embody Chekhov’s characters.  Film has a way of muting the range of a stage actor’s work, and never is that more evident than here.

Other than Bening and the always spot-on Ronan, Mayer’s cast seems to be itching to jump off the screen and onto a Broadway stage.  Dennehy seems so uncomfortable in his role we wonder why a family patriarch is even necessary to these proceedings.  And contrary to stage productions of “The Seagull,” Moss’ character seems superfluous as well.  Motion pictures often work best when larger casts are pared down to the essential few – although that technique backfires occasionally, as in “Cabaret,” which works much better on stage because of the peripheral characters.

Mayer’s film has the architecture of a winning stage production.  But consider this comparison:  In 1994, Louis Malle filmed a version of Chekhov’s “Uncle Vanya,” in which theatre director Andre Gregory and his frequent collaborator, playwright-actor Wallace Shawn, led a voluntary workshop for stage actors to come together to better understand Chekhov’s work through performance workshops.  Shot entirely on a bare stage with actors in street clothes, “Vanya on 42nd Street” is perhaps the most pure motion picture interpretation of Chekhov’s writing, in that Malle purposely shuns the conventions of film in favor of the stripped-down look common to day-one stage rehearsals.

Any director desiring to film Chekhov could take a lesson from Malle and Gregory, and think twice about filming his work in the first place.  Some theatrical material simply works better on stage.  Think “Jesus Christ Superstar” or “Cabaret.”  “The Seagull” falls into this category.  While I didn’t hate Mayer’s version, I wish I could have seen the same cast perform this material in a live setting.