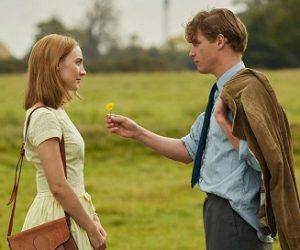 Florence and Edward are newlyweds in 1962 England in Dominic Cooke’s adaptation of Ian McEwan’s 2007 novella “On Chesil Beach.”  The film begins in the hotel room the evening of their wedding.  Someone has ordered them a room service dinner, and the young lovers are anxious for the main course to be served so that the room service stewards will leave them alone.  Upon taking their leaves, we hear the stewards giggling about Florence and Edward.  We’re not exactly sure why, until the camera returns to the newlyweds.

Florence and Edward are nervous.  They are obviously in love, but they are sexual novices.  As their feet anxiously tap on the carpeting beneath the table, they struggle to even make small talk, as neither is willing to admit his or her perceived shortcoming.  This difficult wedding night is used as the anchor for a flashback structure revisiting the breadth of their entire courtship – from their googly-eyed love-at-first-sight encounter at a mixer, to meeting one another’s families, to the selection of the ideal wedding dress.

I’m typically not a fan of the overutilized flashback construction, although it’s use is not overly burdensome here.  Unfortunately, the least interesting sequence is that of the wedding night bedroom courtship (or rather, foibles).  We eventually tire of being subjected to the uncomfortable shortcomings of not merely sexual newbies but of two people repulsed by the mere thought of intimacy.

One flashback takes us to a post-engagement Florence practically making herself ill as she reads an overly clinical description of the act of sex from what appears to be a textbook.  Under these circumstances, I’m guessing most psychiatrists or therapists would suggest that the young couple share a bed for a period of time until they become comfortable with one another.  We keep hoping Florence and Edward will come to this conclusion as well, thereby saving us from having to wince through any more of their discomfort.

But alas, such a realization would render “On Chesil Beach” a meaningless exercise, and McEwan’s self-adapted screenplay takes us to a third act which almost saves the film from its distressing and by-the-book early scenes.  Those of the conjugal wedding-night bedroom are distressing, and the flashback scenes are very routine.

We learn that Edward is a graduate student, and Florence is lead violinist for a string quartet.  Florence hails from an upper-crust family, while Edward was born into a comfortably middle-class background.  We are witness to an accident which left Edward’s mother brain-damaged (not brain-dead, just damaged), and Florence’s father’s occasional outbursts of rage.  We also see how effortlessly Florence bonds with Edward’s mother and siblings.

All of this is only mildly interesting within the context of the screenplay.  Yes, it provides some background, but why couldn’t the story be told lineally, leading to an abbreviated wedding-night climax (no pun intended)?  This would keep us from having to continually return to the wedding night, and would give more heft to the early courtship scenes, as we would not know where their relationship is heading.

Fortunately, the post-wedding-night sequence almost rescues “On Chesil Beach” from the ash-heap of British sexual dramas.  As Edward reminisces about what he could have done differently, I was reminded of Damien Chazelle’s “La-La Land,” which was a much better film, but also benefited from a bittersweet denouement.

As Florence, Saoirse Ronan shines again, although this picture is simply not in the same league as “Brooklyn” or “Lady Bird.”  Still, we sense Florence’s distress as well as her absolute devotion to Edward.  It’s a tough role to pull off, and Ronan succeeds again – leading me to wonder if she will win an Oscar before she turns 30.

Billy Howle (“The Sense of an Ending,” “Dunkirk”) is also strong as Edward, although his underplayed wedding weekend anger doesn’t match the severity of the long-term decisions he makes regarding their marriage.

Ronan and Howle will soon be seen again on screen in Michael Mayer’s adaptation of Anton Chekhov’s “The Seagull.”  I’m a fan of Chekhov’s plays, but they’ve never adapted well to the big screen.  Still, I hope for more sparks than provided “On Chesil Beach.”