A friend of mine recently explained that it’s easy to make so-called “Christian” films for believers.  Mercy Me’s recent story “I Can Only Imagine” is a recent example of such a picture.  It’s a great piece of work for those who already believe.  But it’s not likely to convert any agnostics.  Nor is it particularly interesting for those followers of other faith traditions.

But a “Christian” film that really tackles the heart of Christianity head-on, and questions our belief system?  Now that’s a little trickier.  Trickier to make such a film; and trickier to find an audience.  Paul Schrader’s new offering, “First Reformed,” is the rare picture that successfully questions the convictions of the Christian faith.  Finding an audience might be a challenge, however. 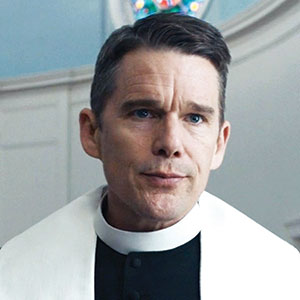 In another moving performance by Ethan Hawke, “First Reformed” follows the lonely life of Reverend Toller, a former military chaplain assigned to a remote Dutch Reformed church in upstate New York, on the verge of celebrating its 250th anniversary.  The church is now primarily a tourist attraction, as Reverend Toller conducts short tours of the church, and sells gift-shop trinkets at the end.  First Reformed does still serve a congregation, although the number of regular congregants appears to hover around a dozen.

So how does First Reformed survive?  It’s an offshoot ministry of a large, modern megachurch known as Abundant Life, whose senior pastor, Reverend Jeffers, is played by Cedric Kyles (Cedric the Entertainer, in a straight dramatic role).  Reverend Jeffers is looking forward to the upcoming sestercentennial, but then he’s not certain exactly what to do with First Reformed.  He’s also very concerned for Reverend Toller.

You see, Toller had encouraged his son to join the military.  He did, and was killed in action.  Toller’s marriage then fell apart, and he now spends his evenings alone in the parsonage, drinking whiskey while writing a 365-day journal about his daily life.  Furthermore, Toller’s health is suffering, but he’s reluctant to seek medical help, assuming his life is either (a) doomed, or (b) not worth living.  The diary serves as a cinematic tool allowing us to experience Toller’s innermost thoughts via voice-over narration – a technique Schrader used to perfection in his screenplay for Martin Scorsese’s classic, “Taxi Driver.”  While dealing with as dissimilar a subject matter as conceivable, “First Reformed” eventually plays out like a Christian version of “Taxi Driver.” 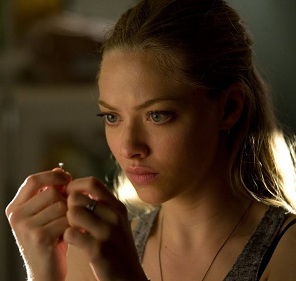 One of Toller’s only communicants, a young pregnant woman named Mary (played by Amanda Seyfried – Cosette in Tom Hooper’s “Les Miserables”), asks him to meet with her husband Michael (Philip Ettinger), an environmental activist dead set against bringing a baby into a world which humanity continues to destroy.  It’s a pretty heavy request for a pastor whose greatest daily achievement might be administering a church tour to a group numbering more than three.  Furthermore, Toller may have been assigned the First Reformed outpost on purpose.   To wit, once he refers to a church pew as a “bench,” and in one service he reads to his congregation from the book of “Revelations,” as opposed to the correct, singular “Revelation.”  These are mistakes no man of cloth would make.  And Schrader is too smart to have made them inadvertently.

One would think Toller would revel at the opportunity to finally apply his seminarian skills to one of his ever-diminishing flock.  But instead, Michael the radical environmentalist inadvertently contributes to Reverend Toller’s defeatist outlook, causing him to question Abundant Life’s largest corporate donor, Balq Enterprises, which happens to be one of the country’s worst polluters.  As a Christian, how is Toller to reconcile such a cognitive dissonance, when God calls us to be caretakers of the earth and its rich resources?  How is he to console Michael and reassure Mary?  Is he developing feelings for Mary, unintentional though they may be?

Reverend Toller’s life is delicately teetering on the edge of a possible violent conclusion (a la Robert DeNiro’s in “Taxi Driver”) – a culmination Schrader is too smart to revisit late in his career, having already covered this ground over 40 years ago.  Or is he?  As Toller descends deeper into his personal abyss, Schrader’s original screenplay takes an allegorical turn, which might be seen as an artifice to those anticipating more of a straight-line story about the struggles of a modern-day minister (such as Robert Bresson’s “Diary of a Country Priest”).  Ironically, Scorsese is said to have based “Taxi Driver,” in large part, on Bresson’s film.  But I believe Schrader’s dream sequence and finale represent a personal conversion and rapture for Reverend Toller.

“First Reformed” is a picture ripe for post-viewing discussion.  Leave time for drinks and/or dinner after watching it.  Ethan Hawke’s brilliant and tortured work may be the best of his career.  And Schrader’s screenplay is likely his finest since “Raging Bull.”  But “First Reformed” stands on its own without any influence from these previous pictures.  It is a crowning achievement to Schrader’s career, and while it won’t be everyone’s cup of tea, “First Reformed” ranks with “Lean on Pete” and “The Rider” as one of the best pictures so far this year.