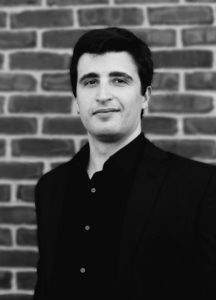 The Indianapolis Symphony Orchestra welcomes Jacob Joyce as Associate Conductor – a key role in the organization’s artistic roster. Originally from Ann Arbor, Michigan, he is currently serving as the Conducting Fellow for the Fort Worth Symphony Orchestra, with whom he has appeared several times during the 2017-2018 season.

He has held positions as Associate Conductor of the Yale Symphony Orchestra, Music Director of the Berkeley College Orchestra, Music Director of Opera Theatre of Yale College, and has served as a cover conductor for the Handel and Haydn Society of Boston. In the 2017-2018 season, he worked with the New World Symphony, the NEC Philharmonia, and the Fort Worth Civic Orchestra; he also appeared with the Frankfurt Radio Symphony Orchestra and the Frankfurt Museums-Orchester as a semi-finalist in the Solti International Conducting Competition.

An avid promoter of contemporary music, Jacob has conducted several premieres of orchestral and operatic works. He worked extensively with the NEC Contemporary Ensemble, and performed with Hub New Music, Cantata Profana, and the Yale-based group SicInc. Jacob is also active in the operatic scene, recently conducting fully staged performances of Hansel and Gretel and the newly-composed Swann’s Way.

Jacob graduated from Yale College with a B.A. in Music and Economics in 2014, and he received an M.M. in Violin Performance from the Yale School of Music in 2015. Jacob then studied orchestral conducting with Hugh Wolff at the New England Conservatory. He has also studied under Robert Spano, Miguel Harth-Bedoya, Larry Rachleff, Toshiyuki Shimada, Kenneth Kiesler, Patrick Summers, and Nicholas McGegan. Jacob attended the Tanglewood Music Center and the American Academy of Conducting at Aspen, where he was awarded the Robert Spano Conducting Prize.

Jacob is a passionate supporter of music education, and has developed in-school programs for expanding access to classical music for children, especially those in underprivileged areas. He frequently holds clinics with public school orchestra programs, teaching orchestral playing technique, providing career guidance, and assisting teachers in curriculum development. He also constructed and conducted an interactive program of Beethoven’s Symphony No. 3, which he has presented with the Fort Worth Symphony in several schools in the Dallas-Fort Worth area.

From the ISO’s CEO

“We are thrilled by the addition of Jacob Joyce to our conducting team,” said Chief Executive Officer James Johnson. “He brings an exciting presence to the podium, and his passion for community outreach and educational programming will be a perfect fit as he conducts the ISO’s Discovery Series, connecting thousands of public school students with orchestral music.”

Other duties with Symphony

Jacob will also take the podium for the ISO’s annual Side-by-Side concert featuring local high school musicians, as well as one of our SymFUNy Sundays concerts for families. Although his contract with the ISO begins in the fall of 2018, Jacob will have a presence in the Hilbert Circle Theatre at the end of the current season. He will conduct the orchestra for a private donor event in late June.